The UESPWiki – Your source for The Elder Scrolls since 1995
< Morrowind: People / Merchants
Jump to: navigation, search 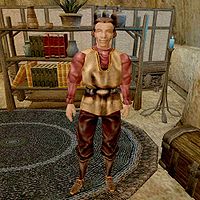 Simine Fralinie is a Breton bookseller who owns a bookstore in the eastern canalworks of Vivec's Foreign Quarter. This store also happens to be the hideout for Gentleman Jim Stacey and Crazy-Legs Arantamo of the Thieves Guild. They're behind a locked door in the back of the shop. There's no key, so you'll have to have some skill in Security or have a good Open spell handy. Simine won't report you for trying, though, so don't worry about sneaking around when you do it.

He wears a common shirt with matching pants and shoes, and carries a chitin club. Aside from his natural bonus, resistance to magicka, and his ability to shield himself for short periods, he knows the following spells: Detect Key, Detect Creature, Absorb Health, Mark, and Recall.