The UESPWiki – Your source for The Elder Scrolls since 1995
< Morrowind: Places: Landmarks
Jump to: navigation, search 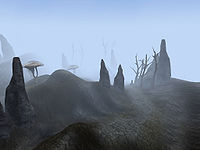 Uvirith's Grave is an isolated place in the Molag Amur region and the site of the Telvanni Stronghold Tel Uvirith.

The site is actually marked on the Morrowind paper map. It is located in the southeastern reaches of the Molag Amur region northwest of the Erabenimsun Camp, and due west of Tel Fyr. The geography around Uvirith's Grave is dotted with the steep hills, steam vents, and large lava pools typical of the Molag Amur region. There is nothing nearby but vampire lairs, Dwemer ruins, and bandit caves.

If you're a member of House Hlaalu or House Redoran, you can get a quest to kill its occupant, Reynel Uvirith.