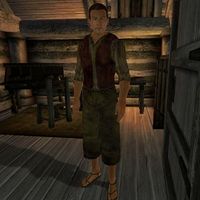 A Stranger in the Abandoned House in Anvil

The Stranger is a rather suspicious Imperial and a member of the Thieves Guild, currently living in the shady abandoned house in Anvil. As you may guess from his personality, he's a rather mysterious person that prefers to keep to himself. He will casually dismiss any question about him or the guild and, contrary to his fellow thieves, he doesn't seem very impressed by the Gray Fox.

Like other members of the Thieves Guild, he prefers to live in seclusion and will spend most of each day inside the abandoned building in Anvil. Due to his lack of a bed, he will spend all night wandering aimlessly around the house until early in the morning at 6am, when he will break off this routine to have a short breakfast. During the weekdays he will keep his meal to one hour and depart for Castle Anvil at 7am. Once he has arrived there, he will look for an available seat in the throne room, where he will spend the next few hours. At midday, he will return to the abandoned house to resume his usual routine, taking another break at 6pm to have his second meal of the day.

On Loredas and Sundas he will skip his trip to Castle Anvil and will instead spend the whole day in seclusion wandering around the house, only stopping at 6am and 6pm for two hour meals. The only exception to this schedule is during the subsequent quests that are given to you by the Gray Fox, during which he will switch to his alternate persona to task you with some special assignments and during The Ultimate Heist, when he is finally acknowledged as Corvus Umbranox, the missing Count of Anvil.

The Stranger wears a set of lower-class clothing which consists of a patched vest, sack cloth pants and sack cloth sandals. He is armed with a leveled shortsword (unenchanted) and also carries around a small amount of gold.

If you happen to run into him while you still haven't joined the Thieves Guild, you can ask him about the infamous Gray Fox, to which he'll respond, "He's a most mysterious fellow. In many ways I admire him. Most of the time I just feel sorry for him." However, once you have joined the guild things change, and he will reply with a totally differing attitude:"Everyone wants to know about the Gray Fox. Gray Fox this, Gray Fox that. He's just a man, not a Daedric lord. I've heard it all. They say he's immortal because he's led the Thieves Guild for over 300 years. No-one has ever seen his face because he always wears that gray cowl. Oh, and speaking of the Gray Cowl, did you know he stole it from Nocturnal herself? You'd think he was Saint Nerevar the way they talk about him." If you try to find out more about him, he will simply dismiss you, saying: "I am The Stranger. That is all you need to know. That, and I am no-one to be trifled with."

During your quest to get rid of Hieronymus Lex, you will be directed to him by beggars. If the beggar's disposition toward you is at least 70, they will point you directly to The Stranger: "Well, only because I like you. Look for a man known only as the Stranger. He lives here in Anvil, down the road from the Chapel of Dibella." Otherwise, you will have to pay the beggar 15 gold to learn how to locate the mysterious man: "That will do. Look for a man known only as the Stranger. He lives here in Anvil, near the Mages Guild. He's out and about in the morning, so I would wait until afternoon or evening to go visit him." Once you present him with the letter of recommendation you are told he can forge, he will agree to do the job, but not before assuring that he will receive his fee. "Hmm. Yes, it can be done. I can change it to give Lex the highest recommendation. I'll need a full day to properly forge this letter. Return then. And of course I will expect payment in full at that time." If you show up the next day without the necessary amount of coin, he will refuse to give you the forged letter until you have the money by saying, "Then what are you doing here? Come back when you have the money." If you instead present with the required payment, he will happily hand it to you. "Here is the new List of Candidates. Hieronymus Lex has a glowing recommendation."

During the final stage of The Ultimate Heist, The Stranger will be found sitting on a bench in the Castle Anvil Great Hall. If you talk to him, he will give the Gray Fox's typical in-quest reply, "You should be on your way by now!" He will be carrying the Gray Fox's standard equipment (but wearing the rings), giving the player a chance to pickpocket his rare-ish boots and cuirass.