The UESPWiki – Your source for The Elder Scrolls since 1995
< Oblivion: Items
Jump to: navigation, search 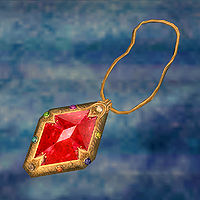 The Amulet of Kings

The Amulet of Kings is a pendant initially worn by Uriel Septim VII. After his assassination, you must deliver it to the Grandmaster of the Blades. After escorting Martin, Uriel's illegitimate son, back to Grandmaster Jauffre, the Amulet is stolen by the Mythic Dawn. You are forced to enter the Paradise of Mankar Camoran in order to recover it. This achieved, preparations are made for Martin's coronation, but the ceremony is interrupted by a Daedric assault on the capital. After fighting his way to the Temple of the One, Martin is forced to smash the amulet, this being the only way to defeat Mehrunes Dagon. The power of Martin's blood summons a rare Aedric avatar in the form of Akatosh, a fiery dragon. Dagon is defeated, but the nearly four thousand year history of the Amulet of Kings is ended.