The UESPWiki – Your source for The Elder Scrolls since 1995
< Oblivion: Items
Jump to: navigation, search

As with previous Elder Scrolls games, Oblivion is filled with books. Most books just fill in back story or provide lore material, but a few books will add markers to your map or give you training in a skill. It isn't necessary that you (the player) read the full text of these special books. You will receive the benefit of them as soon as you open them.

There are two other types of reading material in the game: The Black Horse Courier, and random notes and letters. A list of books broken down by subject can be found here.

The first time you read a given Skill Book, your level in the associated Skill will be permanently increased by one point. If a major skill is increased, it will count towards leveling up; the skill increase will also contribute to the skill bonuses you receive next time you level up. Unlike Trainers, there is no limit to how many Skill Books you can read at one level (other than how many you are able to find).

You can open a Skill Book, read it, and acquire the skill bonus without it being considered theft. Theft occurs only if while reading it you choose to "Take" the book. If you just close the book (putting it back where you found it) no crime is committed.

If you find a second copy of a Skill Book that you have already read, you will not receive any skill bonus for reading the second copy.

When you have reached Mastery in a skill (100 points), reading an unread skill book will not produce any effect: it will not increase your skill above 100 points; it will not increase the Skill Books Read counter in your character statistics either, and you will not even be alerted of the skill book discovery. This also holds true if the skill in question is fortified past 100; you will not gain the relevant skill increase or be notified of the fact that you have found a skill book. Unlike with trainers, using a Drain Skill spell to decrease a skill level under 100 will not allow you to use the skill book to increase your skill level over 100. However, you can decrease your Master skill back down to Expert by serving jail time, allowing you to read the book and get the skill point as normal.

until you have reached Expert status (75 to 99 points) in the relevant skill, since one extra skill point is much harder to gain when you're an Expert than when you're still a Novice. However, this advice does not work for skill books found outside containers during quests, as it is not possible to take them without opening, thus reading them first.

There are 109 skill books in total: 5 for most skills; 6 for Conjuration, Destruction, Illusion, Mysticism, and Heavy Armor; and 4 for Speechcraft. (The four "extra" Magic books are the four Mythic Dawn Commentaries the player is supposed to read as part of The Path of Dawn, leaving the standard 5-per-skill to be discovered outside of the quest).

Twenty of the skill books (one in each skill, except for Speechcraft) can be found in random loot. This means that there is a small chance that one of these twenty books will appear in boss-level chests in dungeons with certain types of enemies. See this page for more specifics. There are also two quests from which you will receive a random skill book as your reward:

Outside of Two Sides of the Coin, the remaining 89 books exist only in specific locations.

If you have Shivering Isles installed, there is an additional quest from which you will receive a random skill book as your reward:

Remember that floors are given using the American style; thus "first floor" in the list means "ground floor" if you're British.

1 You need to complete the Mages Guild Recommendation Quests to reach this location.
2 If someone sees you here you are Trespassing.
3 Taking this book is theft.

If you open such a book, a sign will appear on your map, marking a place.

These are the normal books found while playing the game: ones that do not teach you anything, but may be a good read nonetheless. 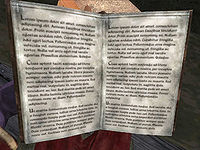 The Lorem ipsum text found on books being read by NPCs
Retrieved from "https://en.uesp.net/w/index.php?title=Oblivion:Books&oldid=1154077"
Categories: