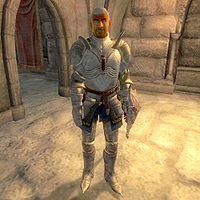 Castellan Athon is a Redguard retired Legion officer who is recommended to you by Nilphas Omellian. If he dies, a Battlehorn Castellan can be purchased to replace him.

Once the Battlehorn Barracks upgrade is purchased from Nilphas, the captain can be found somewhere inside the castle. He sleeps between midnight and 6am in the most ornate of the beds in the barracks area off the Great Hall, and eats for three hours from 8pm at the table in the East Wing. Outside those times, he will either be found practicing his blade skills in the sparring area of the basement, reading at the writing desk in the barracks, keeping watch over the castle in the great hall, or patrolling the castle's exterior. He can also be ordered to follow you, and will return to his normal schedule when released from duties.

If Athon ever dies on your travels, it may be worth picking up his Russet Felt Shirt of Blade Turning, normally not available until level ten, worth an impressive 3302. His other possessions are his steel armor set, excluding the helmet, his Knight of the True Horn Shield, rugged pants, and pigskin shoes. He has a leveled sword, best for the player's level (up to Ebony), as well as a leveled bow and arrows. From time to time, Athon sits down to read at the desk in his room. He will pick up books from anywhere in the great hall to read, and this may include the copy of King, a Blunt skill book, that is found in the upper tier of the hall. Athon also knows a leveled set of knight spells.