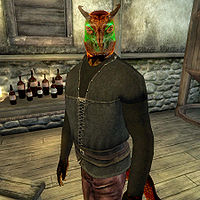 Dar Jee, an Argonian living in Leyawiin, is the second Thieves Guild fence. His barter services are only available after you have joined the guild and been promoted to the rank of Bandit by completing the quest The Elven Maiden. He also enjoys telling racist jokes about the Khajiit.

He lives a rather simple life, although he can be considered a night owl. He sleeps in his house in the east side of the town every day from 6am to 12pm. After waking up, he will head to the Five Claws Lodge where he will shamelessly try to steal a piece of food from the publican Witseidutsei. If he succeeds, he will find himself a nice spot where he can sit and enjoy his breakfast for two hours.

On Morndas, Middas and Fredas, he will then head over to the pool near The Dividing Line for a four hour swim. On Sundas, after his breakfast he heads to the Chapel of Zenithar, receives a blessing from Arkay and then prays for four hours until 6pm. On all other days, he will be found wandering near his house. At 6pm he heads back to the Five Claws to procure himself some dinner, before returning to the alley near his house at 8pm. He then spends ten hours here until his 6am bedtime. During the Drunk and Disorderly quest, he will skip his visits to the Five Claws and remain indoors instead.

He will offer his illegal bartering services at all times, provided you have fenced enough stolen goods and have the rank of Bandit. Like most other fences he will try to remain as discreet as possible and will not offer you his services while traveling from one place to another.

Dar Jee's outfit includes the rare zero weight dark shirt, with a pair of laced leather pants and stitched leather shoes. He also carries the key to his house and a small amount of gold.

From the very first time you meet him, he will begin to tell you racist jokes about Khajiits. "I'm Dar-Jee. I'm a Khajiit in disguise. Want to see me lick my butt? Hahaha! That one never gets old!" If you ask him about the city of Leyawiin, he will reply with yet another joke, although this time he will let you guess the answer: "Want to hear a Khajiit joke?". If you tell him that you don't want to, he will say, "Oh. No sense of humor? Your loss", however if tell him that you want to hear the rest of the joke, he will happily continue with, "Why do Khajiit lick their butts?", finishing it with, "To get the taste of Khajiit cooking out of their mouths! Hahaha! A real thigh-slapper, that one, eh? Phew. I heard lots others, only I can't remember them."

The townsfolk of Leyawiin, regardless of race, are not particularly amused with Dar Jee's jokes. In conversations and when asked for rumors, they will say, "What do you think of the Khajiit jokes Dar Jee has been telling?" and "Have you heard any of Dar Jee's jokes?" Others will simply just comment on the jokes, "Terrible jokes. Just terrible." and "I've heard them. They're pretty stupid."