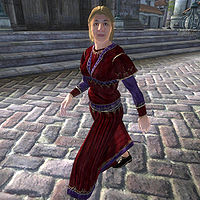 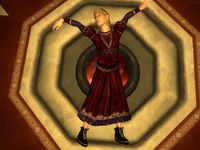 Dumania Jirich is an Imperial priestess and the Primate of the Chapel of Dibella in Anvil. Dumania is killed as soon as the Knights of the Nine plug-in is installed. This means that in the GotY edition, she is always dead. Her body will be found sprawled on the altar in the chapel.

Dumania sleeps in the Chapel Hall between midnight and 6am. On sunny days, she wakes up and heads outside for a long walk in the covered cloister opposite the chapel until midday. She will then travel to the nearby graveyard and use a rake to tend it until 6pm. At 8pm she heads into the Chapel Hall for a two hour dinner. Outside these times, or when it's raining, Dumania can be found anywhere inside the chapel: walking among the pews and altars in the main area, wandering the rooms in the Hall or exploring the Undercroft.

Dumania wears an upper-class outfit consisting of a red velvet blouse, red velvet garment, and a pair of gold trimmed shoes. She carries with her the key to the chapel, a rake, and a small amount of gold. She knows a leveled set of priest spells as well as an extra Restoration spell.

She introduces herself with "Dumania Jirich, Primate of Anvil. I speak with the voice of Dibella, and greet you with love." When asked about Anvil she prefers to talk more about herself, adding "They say that I was selected as Dibella's Primate in large part because of my loving nature and my striking looks."