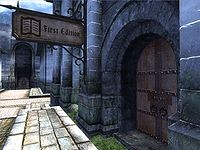 First Edition is a book store located in the Imperial City's Market District. It is found adjacent to the Gate to the Palace District, across the street from The Copious Coinpurse and next to The Merchants Inn.

It is the largest bookstore in Cyrodiil, as well as being the only one in the Imperial City. Among the books on sale many are very rare ones which, in addition to the bookstore being a popular destination for all manner of learning, explains the shop's involvement in a number of quests.

The proprietor, Phintias, has 1200 gold and a Mercantile skill of 80. When bartering, he will buy and sell all kinds of books; among these is the unique scroll Document of Purile Banter, which drains your Personality and Speechcraft while fortifying your Endurance and Willpower.

Note: This section only lists notable books in First Edition. A complete list of available books can be found here. 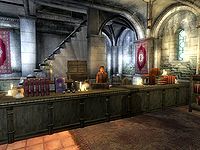 The front door reveals the spacious main trading room and two large bookshelves along the northern wall, loaded to the brink with books. An additional wealth of books is displayed on the counter and on smaller bookshelves strategically placed around the room. The atmospheric crackle from the lit candles provides a relaxing background ambiance for the customers and most of the windows are left uncovered, leaving the shop and all its books easy to find and study.

The big bookshelf closest to the entrance contains some silverware and rarities such as Cleansing of the Fane and the Light Armor skill book The Refugees. The next big shelf contains a novice alembic and a wide array of common books, including all four volumes of Brief History of the Empire. In the eastern corner a few chairs and a table have been set up for waiting customers and the table holds a copy of The Book of Daedra. This is where Phintias will take his breakfast every day at 6am. The small shelf against the eastern wall, under the window, contains a complete collection of Alessia Ottus' guides to the major cities.

The counter displays several interesting books as well, including copies of Thief of Virtue, The Wolf Queen, v 8 and all five volumes of The Real Barenziah. Also on the counter are two sacks and a lectern, both with clutter. Between the counter and the front door is another bookshelf with common books. Behind the counter is a shelf with rarities such as Dwemer History and Culture, History of Lock Picking and Tamrielic Lore. On top of these shelves sits an unlocked chest with up to three pieces of leveled equipment. In the corner near the door leading to the basement, a barrel with food and three sacks with clutter. On the nearby table sits the locked chest in which Phintias will keep the Mythic Dawn Commentaries 3 during the quest The Path of Dawn. 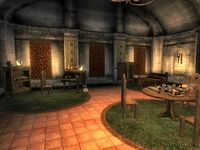 Phintias' private quarters can be found above the main trading room and is equally spacious but has a different atmosphere, mainly due to the big carpets on the floor and the many tapestries on the walls. In the northern corner, on some shelves, is a lectern with clutter and the nearby desk holds the same. On top of the desk sits the Armorer skill book Cherim's Heart of Anequina and two shopping lists: one for clothing and one for food and drinks. The sack next to the desk and the cupboard at the foot of the bed both contains clutter.

The dinner table in the center of the room seats three and holds a solid amount of food: eight radishes, five leeks, two wedges of cheese, a bread loaf and three bottles of mead. The chest of drawers near the eastern wall holds clothing and the two barrels nearby holds clutter. In the alcove is a wine rack with eleven bottles of cheap wine. 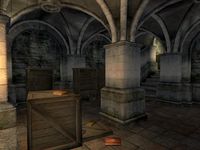 Halfway down the first set of stairs, on the landing, some shelves holds pottery and five handbills representing three different stores in the Market District: three competitive ones from Jensine's "Good as New" Merchandise, one from Thoronir in The Copious Coinpurse and one from Red Diamond Jewelry. Halfway down the next set of stairs, on the steps, are a Guide to Leyawiin and a sack with clutter.

The main basement area contains three empty bookshelves and, next to them, a cupboard with drinks. Near the northern wall is four crates and a barrel, all with clutter and in the nearby corner an unlocked chest with silverware, gold and a slim chance of some jewelry. In between the two pillars is an open crate with a few books scattered around it, including a rare copy of Feyfolken II. The bookshelf nearby contains a common book and on the floor beside it, another rarity, namely Five Songs of King Wulfharth. In the western corner are two barrels, both with clothing or clutter.