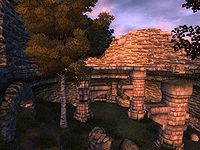 Fort Coldcorn is a small fort between the Imperial City and Chorrol containing monsters (quest-related). It contains only one zone, Fort Coldcorn. 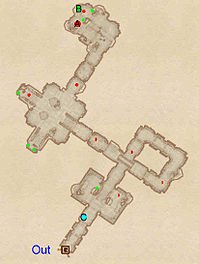 The dungeon is relatively small and linear but contains enough loot to be worth exploring. Simply follow the corridors to the final room where you will find the boss chest (B on the map) protected by a boss monster (A) and a regular monster. You will then have to retrace your steps to exit from the dungeon.

The only other unusual item in the dungeon is the Dead Marauder at C. However, the other chests in the dungeon are all monster dungeon containers, so it's worth the time to unlock the standard chests in case they contain enchanted items.