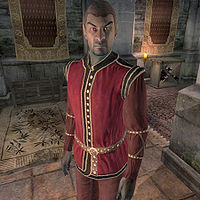 Gilen Norvalo is a Dunmer commoner who lives in the northwestern housing complex of the Imperial City's Temple District with his wife, Ralsa. He is one of the members of The Order of the Virtuous Blood, and spends most evenings at the Order's sanctuary in the basement of Seridur's house. If killed, his corpse never disappears.

He wears middle-class attire that includes a burgundy linen shirt with matching linens and a pair of thick cowhide shoes. Gilen holds a copy of Provinces of Tamriel, his house key and a small amount of gold.

When you first meet him in Seridur's house during the related quest (he will not appear elsewhere beforehand), he will decline conversation saying, "You must speak with Seridur first." He will become more talkative after Seridur says, "Vampires are nasty creatures. They drink the blood of others to conceal their true nature. Such trickery makes them difficult to find. You may ask Gilen Norvalo or Grey-Throat about these creatures as well. They've learned much." adding that, "My knowledge is at your disposal." About Roland Jenseric, he will say, "Roland was always a quiet man. It was only recently he'd met that young lady. Poor girl. We must avenge her death." He will also advise you on how to deal with vampires: "It's said that the bite of a vampire has the chance of infecting the victim. If this occurs, they'll become a vampire in a few days. Be cautious." He'll give you one last piece of advice in his farewell, warning, "Vampires are clever. So watch your back."

Once you've progressed in the quest past searching Roland's house, Grey-Throat will have new advice for you; as reminded by Seridur: "I believe that Grey-Throat and Gilen may have more information for you regarding these creatures." About Roland, he will say, "Odd. A cabin is an unusual hideout for a vampire. They prefer dank caves and the like. Much darker and no need to block out windows." He will also give you some more general advice about vampires, informing you that "I've learned some more information. Vampires are immune to paralysis spells and common diseases. I hope that helps in some way."

Once Roland is dead, Gilen will reflect: "I never would have guessed that Roland was a vampire. I could have sworn I saw him walk in daylight." However, if you choose to believe Roland over Seridur, Roland will direct you to speak to Gilen once again: "I know about Seridur and his 'secret order.' What better way for a vampire to hide than to pretend he hunts them? You may want to speak to Phintias at the First Edition bookshop in the Market District of the city. I know he goes there occasionally. I doubt that he's told Gilen and Grey-Throat anything, but you could always try." If you lie to Seridur about Roland not being home, Gilen for his part will add "I knew it. Like I said before, a vampire wouldn't hide in a cabin. It'd be more like a cave or some other dank place." He will also provide his opinion on Seridur, to help you decide who is really telling the truth: "Seridur? He founded this group a few years ago. I was impressed with his knowledge of vampires. When we decided to make the group official, Seridur offered his basement as our headquarters. Quite nice, isn't it?" Lastly, he will give some more advice on dealing with vampires: "Normal weapons won't harm a vampire, they must be enchanted. Make sure you're equipped with such an item."

After speaking with Phintias and learning about Memorial Cave, Gilen will mention something strange about Seridur: "Oh, I believe he left a message with Grey-Throat. Something about not being here for a few days?" This leads you to the cave, and When you find Seridur at the end, part of his monologue will include threats against Gilen (as well as Grey-Throat and Roland): "After I'm through with you, I'll find Roland and finish what I started. I knew hiring you was a mistake, but I had to keep up appearances. The damn "Order" insisted we get you into the picture. I think after I'm done with Roland, Gilen and Grey-Throat will have to be dealt with."

Once Seridur is finished instead and you've told Roland, Gilen will see where things went wrong and apologize: "Please forgive my ignorance. Had we known about Seridur, we'd never have put you in harm's way. I'm astounded that the very thing we decided to fight turned out to be in our midst." When asked about Roland, he'll simply state "The Order welcomes him." If you ask for more information about vampires, he'll just say, "I'm afraid there isn't much more I can tell you. Perhaps one of our books can answer any more questions you may have?" Roland himself will also be ready to speak with you, mentioning Gilen's intense participation in the rebuilding of the Order: "It's so good to see you again. I've spent a good deal of time speaking with Gilen and Grey-Throat. They agree that the Order should live on." After your honorary induction to the Order of the Virtuous Blood, he will refer to you as "Yes, Sister/Brother?" He will also have more to say about Roland: "He's a fine man, and an honored brother."