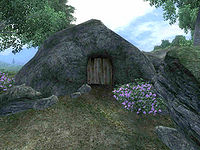 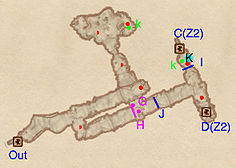 The bandit inhabitants seems to occupy themselves with illegal enology, as there are countless bottles of Surilie Brothers Wine and several tools for wine making to be found in this zone. Door Out opens to the sight of a small table with wine and a fur helmet; proceed forward up the slope for an encounter with a Bandit Hedge Wizard. Backtrack a bit, take the other tunnel and avoid the Tripwire trigger at H. Head north at the intersection and loot the sack for the Horn Cave Cellar Key at k. Backtrack to the trap and unlock the wooden door with the key. At the next intersection, pick open the lock on the northern door and loot the Large Chest (k) for the Storage Key, even if it is useless (see the notes section). Notice that a thirsty goblin (K) apparently found its way into this small room and died from drinking. Head either north to door C or south towards the trapdoor at D; both will lead to the same zone, Horn Cave Still Pools. 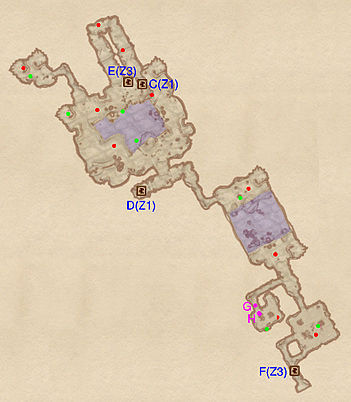 Depending on your choice of route in the previous zone, you will arrive from either door D or C. Regardless, make sure to loot the four chests in the northern area (green dots on map) and make a choice; either proceed through the underwater tunnel to door E, which provides early access to the third zone, or head south for a more controlled exploration of the zone. If you choose the latter, you will quickly find yourself in another large cave with another pool of water and a wider tunnel leading south. Investigate the small chamber on your right, but make sure to avoid the Pressure Plate trigger at G and the Swinging Mace trap (H) it releases. Backtrack to the previous tunnel and continue south to door F, leading to Horn Cave Grottoes. 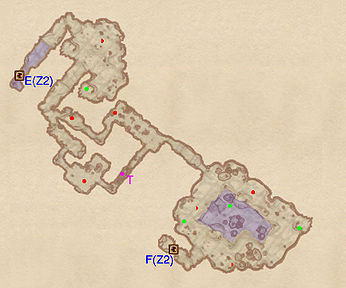 Once again, depending on your choices in the previous zone, you will arrive from either door E (northern area) or door F (southern area). Luckily, Horn Cave Grottoes is fairly linear, so keep an eye on your map and make sure to loot the three chests in the large southeastern room and fight the opposition. Take note of the Cave In trap at T, which can be avoided altogether by staying in the northernmost tunnel and claim the contents of the chest in the semi-large northern room. Either backtrack through door E or F (The former offers the fastest way back to the first zone) to Horn Cave Still Pools.