A bird's eye view of the Imperial Palace

The palace is strictly guarded by elite Palace Guards, who advise visitors to maintain quiet at all times, and not to enter any floor above the second. Except during a single Thieves Guild quest, the only levels available are the Elder Council Chambers and the Palace Basement, though entering the basement is trespassing. The door providing access to the upper levels of the palace is locked (key required), and there is no key that will open the door.

During The Ultimate Heist, a path through The Palace Sewers and The Old Way is revealed, leading underground from Beneath the Bloodworks to the Imperial Guard Quarters. Above the guard quarters are the Elder Scrolls Library and the Moth Priest's Quarters, and the top level is the Imperial Battlemage's Chambers. 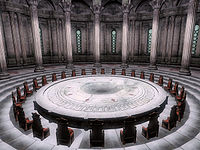 The Elder Council's chambers is the only legally accessible area of the Imperial Palace. A hallway circles the main chamber which holds the large table surrounded by High Chancellor Ocato's chair and twenty-nine others. Following the hallway clockwise leads to the basement, while the other end of the hall leads to the second floor balcony over the main chamber. The other door on the second level leads to the guard quarters. 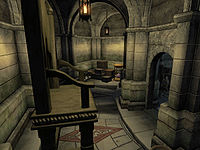 The oversized objects in the basement 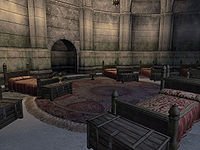 The entrance from the Elder Council chambers leads into a hallway that surrounds the central rooms, a dining room and a sleeping quarters. The doorway at the opposite end of the hallway leads to the Elder Scrolls library.

The single door on the west side of the hallway reveals the dining room, with a large central table that holds twelve carrots, six strawberries, four blackberries, four cheese wedges, three apples, three loaves of bread, three ears of corn, a head of lettuce, four bottles of beer, and a bottle each of Surilie Brothers Wine and Surilie Brothers Vintage 415 and 399. A table in the north end of the room holds two more bottles of beer, and two non-respawning chests on the northwest wall can hold armor and weapons or gold and jewelry, while a third respawning chest holds potions. Two food cupboard sit in the north and south corners of the room, and a table in the south end holds another bottles of beer. Nearby sits two food barrels and a non-respawning clutter sack. Behind the table on the east wall sits another nine non-respawning sacks - seven with clutter and two with grain - and three food barrels. 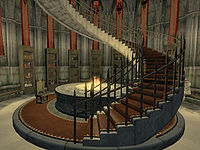 The lower portion of the library 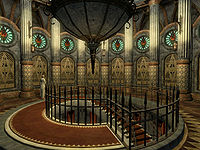 The upper portion of the library

Note: This section lists notable books in the Elder Scrolls Library. A complete list of books stored in the library can be found here.

In the library, seven tall bookshelves line the west wall. The southernmost holds two non-respawning clutter sacks and seven notable books: Aevar Stone-Singer; Azura and the Box; Dwemer History and Culture; Feyfolken I, II, and III; and History of Lock Picking. The next holds four bottles of Surilie Brothers Wine. The bookshelf beside it holds several ingredients: three samples of ironwood nut, two mandrake roots, two samples of columbine root pulp, a daedroth tooth, fire salts, a white seed pod, a sample of harrada, and wisp stalk caps. The central set of shelves holds two more bottles of Surilie Brothers Wine, as do the shelves next to it. The bookshelf beside the northernmost holds two expert chameleon scrolls and an expert detect life scroll along with a non-respawning jewelry chest. The northernmost bookshelf holds another non-respawning jewelry chest and a copy of The Third Door. A chair sits at the pedestal in the center of the lower level, where you receive the Elder Scroll during The Ultimate Heist. 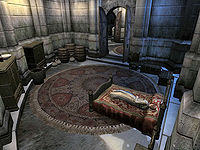 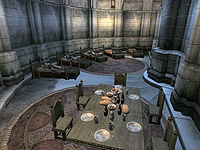 The entrance to the Moth Priest's quarters from the library enters into another circular hallway with a door to the Imperial Battlemage's chambers at the other end. The door on the northwest side of the corridor leads into a large room with five single beds on the northeast bed. Three of them have clutter chests at the foot, while the chests at the foot of the other two beds hold potions. Two food barrels sit in the southeast corner, and the table in the west end of the room holds twelve strawberries, three apples, three loaves of bread, a bottle of Surilie Brothers Wine, three bottles of Surilie Brothers Vintage 415, and a bottle of Surilie Brothers Vintage 399.

The door on the southwest side of the hall leads into a storage room with three food barrels, three non-respawning grain sacks, and a table set with six apples, two loaves of bread, and three bottles of Surilie Brothers Vintage 415 against the north wall. The northeast corner holds two food barrels, a potions chest, and two wine racks that hold seventeen bottles of cheap wine. The table in the southeast corner holds two apples and a bottle of Tamika Vintage 399. The doorway on the east wall here leads into a smaller bedroom with a double bed against the north wall. Two clutter chests - along with a table that holds two apples, two loaves of bread, and two bottles of Surilie Brothers Vintage 415 - sit in the northeast corner. Another bottle of the same sits on top of one of the two clothing cupboards on the southeast wall. In the southwest corner sits three food barrels and three non-respawning clutter sacks. 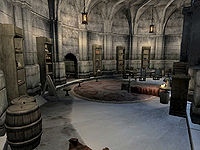 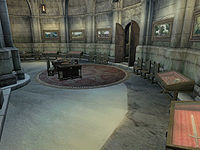 The living area of the quarters