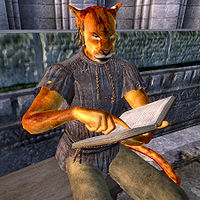 J'baana is a Khajiit agent hiding out in a tent behind the Imperial City Prison. He is the master trainer in Security. He is not actually very well imprisoned, since he is a master of Security and has thirty lockpicks; he may in addition pickpocket most of the prison keys from the guardsmen. Inside his tent are two food barrels, two clutter sacks, and a clutter chest, along with a bedroll. The table next to his tent holds five strawberries, two apples, a loaf of bread, and two bottles of cheap wine.

Despite his apparent imprisonment, the guards have obviously given up trying to contain him and he now has free reign over the prison gardens. To get to him you should have to break through a tightly locked door in the Bastion, but guards on patrol kindly unlock the outer gates as they pass through. J'baana sleeps in his tent from midnight to midday, a full twelve hours of rest. When he wakes up he has a two-hour picnic at the table beside his tent before heading up the steps to sit on a bench and read for six hours. At 8pm he returns to the table for another two-hour snack. Outside of these times he can be found exploring the compound, free of any intervention from the guards. Depending on where you are in the Prison District, he might walk to either the west or the east gates before returning to his previous activity. After he has agreed to train you, he will provide this service at any time.

He wears a complete set of prison garb consisting of a shirt, pants, and shoes. He carries a copy a of Brief History of the Empire, v 4 and thirty lockpicks. He knows three journeyman level spells: Chameleon, Invisibility, and Silence.

Fellow agents and Thieves Guild members Mandil and Dro'shanji will direct you to J'baana for master training. Mandil will reveal that the master of Security is supposedly imprisoned when she provides you with her reference: "Only one has a better mastery of locks than I. You need to speak to J'baana. You can find him imprisoned at the Imperial Legion headquarters." Dro'shanji will provide you with a similar reference, although suggesting that J'baana is rather a "guest of the Legion": "If more knowledge is what you seek, you must consult J'baana. He is wise in the way of locks. He is a guest of the Legion, at the Legion Headquarters in Cyrodiil. Seek him there." When asked about training again, either trainer will say: "You must find J'baana, and learn from him."

Speaking to J'baana will have him greet you by saying: "Do you have business with me?" Asking him for training will have him demand that you perform a service before he is willing to train you: "How very arrogant of you. To think that I would aid you out of the kindness of my heart? Since you are here, and since you want something, you are useful to me. Travel to Bravil, and speak with S'Krivva. She should have a message for me." Speaking to J'baana before you receive the message will have him refuse your request to speak, claiming that you have nothing to discuss until this task is finished: "Until you have the message from S'Krivva, we have nothing further to say to one another."

Once you travel to Bravil and find S'Krivva, she will be shocked by your request for the message, as it was already supposed to have arrived: "What? I... J'baana was informed already.... The delays are not my fault... Here, take this to him. It is not my fault. The job will be finished, I swear it." Asking her again will have her say: "I've given you the message. There's nothing more I can do."

S'Krivva will give you a Handwritten Note. If you read it from your inventory it will say "3 Prowlers sent to Elsweyr. The item should be acquired within the week. Please have patience."

Once you return to J'baana with the note he will greet you by saying: "Have you returned with a message from S'Krivva?" If you ask him about the message he will be disappointed by its contents, but will agree to train you since you upheld your end of the bargain: "Ah, yes. Thank you. I see nothing has changed. How... disappointing. Nevertheless, you have done your part. Now, if you wish to learn from me, I have much I can teach you."