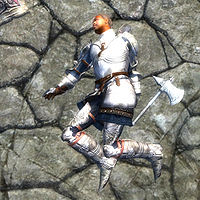 Lord Kelvyn was a Redguard knight and lord of Battlehorn Castle before being killed by a group of Marauders. When you receive his will it mentions that he is waiting for a message from Lord Kain, not knowing that the lord is trapped in the bowels of the castle, as an undead creature. Evidently his father's untimely death meant he never did tell his son about what had happened, as he had intended to.

Lord Kelvyn wears steel cuirass, steel gauntlets, steel greaves and a pair of steel boots. On his corpse he carries a black & burgundy outfit and a pair of gold trimmed shoes. Next to his corpse you will find a silver war axe and a shield of True Horn.