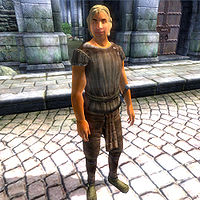 Lurio Maenius is an Imperial commoner. He does not actually appear in the game and must be spawned using the Console. He was meant to live in the house of Matthias Draconis in the Talos Plaza District. His only schedule involves standing wherever he happens to be, not moving from his spot.

He would have worn a belted vest, huntsman leather pants and a pair of buckled shoes. He would have carried an iron dagger, Matthias' house key and a small amount of gold.

He has two unique lines of dialogue. His greeting would have been: "My name is Lurio Maenius. I share a house with Matthias Draconis. I'm between jobs as a private guard." When asked about the Imperial City he would have complained about his unemployment: "If I don't find something soon, I'm going to have to try my luck at adventuring. My pals say there's a lot of caves and ruins west towards Skingrad."