The UESPWiki – Your source for The Elder Scrolls since 1995
< Oblivion: Places: Homes
Jump to: navigation, search 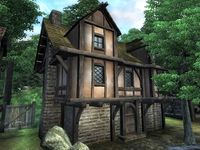 Marlena Brussiner's House is located in the eastern part of Hackdirt and is seemingly worn-out after years of decline.

The boards are falling out of the ceiling and on a battered crate grow two plants of clouded funnel cap and two of cinnabar polypore red cap. In the upstairs area are a couple of chests with clutter and, on top of some drawers, an iron war axe. In the other end of the room, on the dinner table, sits an iron dagger. The basement area is less messy and a set of shelves holds three tomatoes, a pumpkin and an iron mace. The entrance to Hackdirt Caverns is located in the northeastern part of the basement and is unlocked.