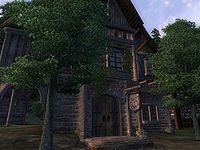 The publican, Vlanhonder Moslin, has a leveled Mercantile skill. Although he is a merchant, he is never scheduled to provide any services; therefore it's impossible to barter with him. The ground floor contains a very large, but somewhat bare, reception area. It consists of a counter, a dining room and a bar with another counter. Behind this counter is a trapdoor to Hackdirt Caverns. The rooms are upstairs, up the right flight of stairs.

The room that you can rent is the one on the left: it is spacious and well-lit and contains a lower-class single and two tables. The other room contains some toppled furniture and an owned double bed. The left flight of stairs leads to Vlanhonder's private quarters, which are locked. They contain two dining tables, a counter and an owned double bed. A portion of bonemeal can be found on one of the tables.