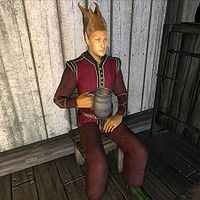 Ormil, an Altmer publican, is the innkeeper of The Bloated Float Inn, which is located in the Waterfront District of the Imperial City. Although he is somewhat wealthier than most other Waterfront residents, getting caught pickpocketing or killing him to obtain his gold will result in you being cast out of the Thieves Guild.

Ormil wears a middle-class outfit consisting of a burgundy linen shirt and burgundy linens, with an upper-class pair of green velvet shoes. He carries the key to his cabin, as well as a small amount of gold.

Ormil offers his services—bed and board—almost all of the time, only stopping to eat from 6am to 8am. This only changes when he is captured and taken into his cabin by the pirate Selene. During his incarceration he simply wanders around until his release, no matter how long it takes.

Ormil is obviously proud of his vessel-turned-inn, as shown by how he greets you with, "Well met. Welcome to the Bloated Float. She's the finest inn on the water in all Cyrodiil." This is despite the fact that she's the only inn on the water. Either way, he'll further show his pride with, "All the furnishings were built inside the ship since they were too big to be carried on board. Spared no expense." He'll be glad to rent a room to you for the scant price of 10 gold. It can be found below deck and is the door on the left. Sleeping in the bed begins the quest An Unexpected Voyage, which must be completed to return to the Imperial City.

After you wake up to find the ship afloat and out to sea, you'll quickly find that you have to dispatch each of the pirates (Lynch, Minx, Wrath, and Selene) to rescue Ormil and his bouncer Graman gro-Marad. You'll find Ormil locked in his cabin, guarded by Selene. If you speak to him before confronting her, he'll mutter, "I... can't speak to you... talk to her..." He's obviously terrified of her, as shown by his plaintive, "Don't leave me!" if you walk away without dealing with Selene. Once you're done with Selene and she's either dead or subdued, Ormil will be pleased and say, "Oh thank goodness! That horrid woman kept threatening me! She said if I didn't come up with the loot she'd throw me to the slaughterfish." If Selene refuses to surrender and you are forced to kill her, Ormil will remark upon her death with both relief and sadness: "She was a ruthless woman, and I'm glad she's gone. Such a waste..." and "It's a pity she wouldn't surrender. Such a waste of a young life." He also promises to explain her death and those of her comrades to the Imperial Watch: "I'll turn over her body and the bodies of her compatriots when we arrive at the Imperial City. Don't let it trouble you, friend." If you succeed in talking her down, he'll instead say, "She was a ruthless woman, and I'm glad she's behind bars where she belongs," "I feel much better now knowing she's locked up," and "Selene no longer holds the Bloated Float. Once we get to the Imperial City, I intend to make sure she is prosecuted to the fullest extent of the law."

If you forced Selene to surrender, Ormil will have a lot to say about her upcoming incarceration. As soon as you speak to him after dealing with her, he'll tell you, "Now that she's surrendered, please escort her to the last room on the inn deck. We'll lock her in there until we arrive at port." Trying to speak to him before that is no use, as he says, "If you get Selene safely locked up, I can tell you all I know. I won't feel safe until you do that." Once you've done so, Ormil will be more than pleased to be returning to the Waterfront. "Now that Selene is locked up safely below, I think we can all breathe a little easier. I can't thank you enough." He'll offer to reward your services with, "I honestly don't know how to repay you. I'm not a wealthy man by any means, but perhaps I could assist you in other ways." Somehow he finds a way however, and will pay you a level-dependent sum of gold (shown here), adding with his customary cheer, "Here you go. Don't spend it all in one place... unless it's here of course!"

Ormil will then suggest that you take a rest after dealing with the Brigands: "Anyway, sorry to ramble. You better get below now and rest until we arrive safely at the Imperial City docks." Hesitating won't get you anywhere, as he insists, "I suggest you rest in your room until we arrive back at the Imperial City. Graman should have us underway soon." Doing so completes the quest and is the only way to return to the Waterfront, so there's no point in further resisting.

Ormil will be more than glad that this particular adventure ended so well: "I'm glad that you were on board to help rid me of them. If you hadn't been here... I don't even want to think about it..." He'll also take a much more able-bodied stand on Selene than when he'd been locked in his own cabin, stating that "Selene'll get what's coming to her when we arrive home," (if she surrendered peacefully) or "She's lucky I didn't have her tossed overboard." He'll congratulate you further with "I abhor killing, but you did the right thing," if you fought her. No matter how it ended for Selene, he'll be pleased with the results regarding his salvation: "Thank goodness you arrived when you did! I feared that I'd be thrown to the slaughterfish." Regarding the lie Ormil told about there being a priceless "Golden Galleon" on board the Bloated Float (prompting Brigand capture in search of it), he'll add, "What a fool I was."

Ormil will also be glad to tell you the reason that the Blackwater Brigands targeted his vessel in the first place. "Well, I'm afraid all of this was my fault. They hijacked the Bloated Float because of me. Business has been waning of late, so I invented a story. I fashioned a tale about a 'Golden Galleon' that the previous owner hid within this very vessel. It was to be a statuette made completely of gold. At the time, the idea was quite clever, I thought. I figured the lore would draw more curiosity seekers and adventurers looking for the treasure. What could the harm be if while they were here, they bought a drink or two? My business has increased quite a bit since I leaked the story. Well, obviously, I was mistaken. It was a terrible idea. I'm just glad that no innocents were hurt; I wouldn't want to have their blood on my hands. Anyway, sorry to ramble. You better get below now and rest until we arrive safely at the Imperial City docks."

Graman gro-Marad, the bouncer at Ormil's establishment, was also made hostage by the Brigands. He will, however, help return the ship to its dock, but not until he is reassured of his boss' safety: "This ship doesn't move 'til I know that Ormil's safe." Once so reassured, he will be completely consumed with returning to the Waterfront and refer you to Ormil with, "I'm sure Ormil can help you now. I'm busy trying to get us home," and "Thanks again for helping us. I'm sure Ormil will reward you appropriately." After returning from the unexpected voyage, Waterfront residents will tell you, "Someone said the Bloated Float mysteriously departed from the docks and then returned. I didn't know she was even seaworthy!"