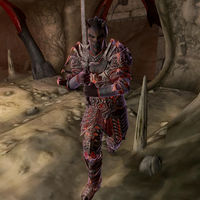 Orthe is a Dremora Kynreeve in Paradise Grotto, in Mankar Camoran's Paradise, where he oversees the torture of Ascended Immortals who began to question their master's ideals. Orthe seems to despise his position there, and, like all Dremora, looks down upon his mortal charges. It seems that Orthe has a lovely lava cage for visitors. He isn't the only pain dealer in the cave; along with him there are his two Dremora fellows, Ranyu and Amkaos.

Orthe wears Dremora Kynreeve boots, greaves, and cuirass. He wields a Dremora Claymore in combat. Besides several leveled potions he carries his key to a gate in the Forbidden Grotto. As a Dremora, Orthe possesses the relevant abilities.

To which Eldamil will start responding, but will be interrupted by Orthe demanding that Eldamil uses his proper title. "A prisoner, sent in by ..."

"Show me some respect, worm! Unless you want to end up in the cages with them."

Eldamil will then correct his original excuse to include a reference to Orthe's title, saying " ... Yes, kynreeve. Sir. This prisoner was sent in by Kathutet for questioning. I was about to begin."

Orthe will then question who exactly you are, with "This is not one of Mankar Camoran's chattels from the Garden. Who is he/she?"

Eldamil will respond to this question by saying "Nothing escapes your vigilance, kynreeve. Kathutet wondered as well. This is why he sent him/her for questioning."

Orthe, satisfied with Eldamil's explanation will then let him proceed. "Well ... carry on."

Eldamil will then end the conversation by saying "Of course, kynreeve."