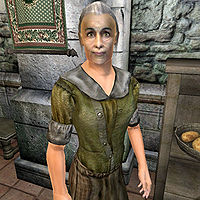 Romana Faleria is an Imperial commoner residing in the Imperial City's Elven Gardens District. She is the girlfriend of Tertius Favonius and they share his house in the northeastern part of the district.

While Tertius hands out copies of The Black Horse Courier all day long, Romana lives her own quiet existence and spends most of her time either at home or strolling around in the big city. She wakes up at 6am and spends the first two hours of the day on the ground floor with Tertius. He leaves at 8am, but Romana stays a bit longer and leaves at 1pm for a two-hour lunch at The King and Queen Tavern. Once she is full she will travel to the Temple District and stroll around there all day long. She returns home at 10pm for two hours of quality time with Tertius before her bedtime at midnight.

At midnight, on the 29th of each month (with the natural exception of Sun's Dawn), Romana packs up, leaves the Imperial City, and takes a long, dangerous trip to Bruma. She crosses the Talos Bridge and heads toward Lake Rumare using the Red Ring Road. Right after Aleswell she heads north on the Silver Road which she follows for the rest of the trip. It usually takes her sixteen hours and she arrives at Bruma's east gate at 4pm. Once there, she quickly books herself in at the Jerall View Inn for two days of socializing with the many Nord regulars. When the clock strikes midnight on the third day, she heads back to the Imperial City.

Romana wears a set of ordinary lower-class items which includes a pair of clogs, coarse linens, and a green wool shirt. She carries her house key and a small amount of gold.

When you meet her for the first time, it becomes apparent just how proud she is of her boyfriend: "Isn't Tertius a dreamboat? I'm Romana Faleria. I'm such a lucky girl." She will also reveal that she is aware that Tertius used to be a womanizer: "It is SO hard to find a man you can trust in this big city. Sure, Tertius has had his share of girls. Just look at him. But all that's changed now." Talking to Tertius proves that she might be right: "Romana and me have set up housekeeping. She's a real doll, isn't she?" and "I like the ladies. It's been my weakness. But now I've got Romana, I stay away from the fleshpots."