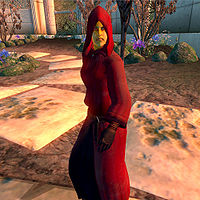 Ruma Camoran is an Altmer Mythic Dawn Adept and the daughter of Mankar Camoran. She is encountered in Lake Arrius Caverns during the main quest. If you opt to pretend to join the Mythic Dawn, Ruma will order you to slay Jeelius as a sacrifice to show devotion to Mehrunes Dagon. Later she is encountered in Paradise where she faces you along with her father and her brother, Raven Camoran. In combat, she will use shield spells and attack with her destruction staff at range.

When you first enter conversation with her, she will ask you to slay a "sacrifice", the Argonian named Jeelius: "You have come to dedicate yourself to Lord Dagon's service. This pact must be sealed with red-drink, the blood of Lord Dagon's enemies. Take up the dagger and offer Lord Dagon the sacrificial red-drink, as pledge of your own life's blood, which shall be his in the end." If you accept, she will respond with: "Lord Dagon thirsts for red-drink. Sate him." If you discuss the sacrifice, she will say: "You must slay the sacrifice to bind yourself fully to Lord Dagon's service. Lord Dagon thirsts for blood." Once you complete your "initiation", she will say: "Well done. You are now a member of the Order of the Mythic Dawn, one of the Chosen. Your life belongs to Lord Dagon." On the other hand, if you decline from the start she will end the conversation with: "Then Lord Dagon shall drink your blood instead.", and subsequently attack you. If you choose to attack her after accepting to slay the sacrifice, she will not use any more unique dialogue.

In Paradise, Ruma will first greet you on the steps of Carac Agaialor, Mankar's palace, along with her brother, Raven. Her first words will be: "You did not expect to see me again, did you? You have no grasp of the power that my father has at his command. You think you can stop us? Soon Mehrunes Dagon will walk upon Tamriel for the first time since the Mythic Age, and our victory will be complete. Come, my father is waiting to welcome you at Carac Agaialor." The conversation will end, and she will move to enter Carac Agaialor. If you attempt to speak to her again, she will simply say: "Why do you delay? Do you fear to face Mankar Camoran himself? As well you should." and end the conversation. This is the last unique dialogue you can receive from her, as she is subsequently killed by you.

She wears a Mythic Dawn robe with a matching hood and a pair of braided leather sandals. She is armed with a combat magic staff and carries a small amount of gold. Ruma has a special birthsign which gives her Fortify Magicka and Shield benefits, as well as a Bound Dagger spell. Additionally, she knows a leveled Shield spell and a leveled Shock spell.