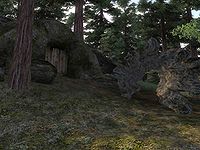 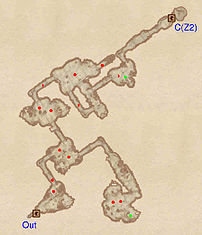 Serpent Hollow Cave is a relatively small and generic dungeon, with little in terms of loot or valuable treasure. However, it has a large amount of enemies in the first zone to make up for the lack of loot. Fortunately, many of these enemies are mere nuisance animals.

The second room in the cave splits into two distinct areas. There is a chest in the right area, but the rest of the dungeon is accessed through the left corridor. There is one more loot chest in this area before you reach door C, leading to Serpent Hollow Chillers.

Serpent Hollow Chillers has far fewer creatures and treasure than the first zone, but is home to the boss-level monster (A) and chest (B). There is a small area off of the normal cave that can be accessed through the left corridor from the first room in the zone. but it only contains an additional creature. A mist blanketing this area's second room gives the zone its Chillers name. Otherwise, this zone is fairly linear and just as undistinguished as the first zone.