The UESPWiki – Your source for The Elder Scrolls since 1995
< Oblivion: Skills
Jump to: navigation, search

Speechcraft affects disposition, i.e., how people react to you and how much they like you. Speechcraft can also be used to lower the disposition of some NPCs below their aggression rating as an alternative to a Frenzy spell (helps with Mercantile).

In-game Description: Use speech to persuade listeners to like and trust you.

To increase speechcraft skill, practice the Persuasion minigame on everyone you meet. Use speechcraft to maximize the disposition of all NPCs; only use Charm spells after that point.

If you have a high Fame it can be difficult to find people with a low disposition towards you. To overcome this, or just be able to still train with an NPC you previously maxed out, you can:

* Note that this item is not readily available due to an error in the Construction Set.

When your speechcraft skill reaches 70 or higher, NPCs will start saying: "You've got quite the silver tongue."

The following standard classes include speechcraft as a major skill: 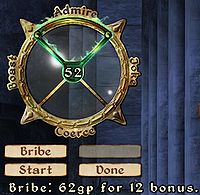 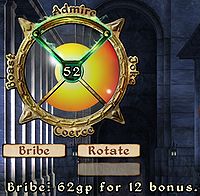 A round of persuasion in progress

The persuasion mini-game can be confusing at first but with a little practice and some basic tips you'll be maxing the NPC's disposition in no time.

There are four different 'actions': Admire, Boast, Joke, and Coerce. During a mini-game you must select each action once. Every NPC will love one, hate one, like one, and dislike one. A given NPC's reaction to each of the four actions is predetermined, and will be the same every time you talk to that particular NPC. When you select an action that the NPC loves or likes, his disposition always goes up; when you select an action that the NPC hates or dislikes, his disposition always goes down. On top of that, the NPC's disposition will slowly go down with time as you play the minigame.

Generally, it is fairly easy to tell which are the "loves" and "hates" actions for an NPC. Once you actually start playing the mini-game (i.e., once the colored wedges appear), hovering over each action will change the NPC's facial expression, with a big smile for the "loves" action, and a sneer/frown for the "hates" action. On Khajiit and Argonians, the facial expressions can be somewhat harder to recognize, but the height of the ears (up = happy) on a Khajiit and the width of the eyes (narrow = unhappy) on an Argonian should give sufficient clues. The other way to figure out that NPC's reactions is to "waste" a game by just clicking the full wedge four times in a row: notice whether the disposition goes up or down with each click. Since those reactions remain the same, you can then use that information to your advantage in subsequent games.

Once you have identified the "loves" and "hates" reactions, the "likes" and "dislikes" reactions can easily be distinguished by switching back and forth between the two. Although they are subtle versions of their more extreme counterparts, you will be able to see a frown emerge when switching from "likes" to "dislikes", and the corners of the mouth rising slightly when switching from "dislikes" to "likes". With all four reactions identified, and their positions committed to memory, you can proceed to play the game.

What you have to do is select each of the four actions in some order, based upon the size of the color wedges shown. When you choose the full wedge, you will get the maximum possible response from the NPC; when you choose the empty wedge, you get the minimum possible response. So to get the NPC's disposition to go up, you ideally would choose full wedges for "loves" and "likes" and empty wedges for "hates" and "dislikes". But the ideal is not always possible.

When you start a mini-game, the computer randomly decides which wedges go where for that mini-game. Each time you make a choice, the wedges will rotate one position clockwise. If your speechcraft skill is high enough, you will also get one free rotation. Because time is working against you, it is generally better to act quickly than to spend a lot of time figuring out the perfect plan for each mini-game; the following strategies can help you make quick choices. Don't worry too much about making mistakes in an occasional game. You can keep playing over and over again (at least until the NPC reaches his maximum disposition).

Same as Strategy 1, except:

The following table provides the messages that are displayed when your Speechcraft skill levels up.