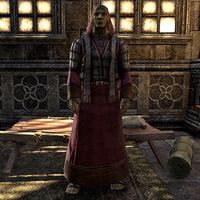 Abbot Durak is the Orc leader of the Spirit Wardens, a group of peaceful Azura worshipers. As a child, he was raised within the ruins of Orsinium and was looked down upon by his peers due to his study of magic and lack of physicality. After hearing Azura's words and wishes, he traveled alone to Stormhaven to found the order which would become the bulwark against the cult of Vaermina. Master Muzgu is possibly one of his brothers.

if you try to speak to him before entering his dreamscape, you'll only get the response:

Durak can be met for the first time in his dreamscape.

Count Hosni at-Tura:"Ha! Durak. You say we betrayed you, but the Spirit Wardens and the Midnight Union were never allies."
Lady Adima:"Indeed. We serve two very different mistresses. Our dream is your nightmare. Welcome to the new world, Abbot!"
Abbot Durak:"You're no dream spirit—you're real. Can you help me?"

"Our allies have betrayed us. The Midnight Union are now enemies—and I failed to see it coming."
Abbot Durak, you must wake up!
"I can't, my child. These chains bind me to my nightmare.
However, it's still my dream, so I know one of the Midnight Union men outside carries the key to my chains. Slay them until you find it. Don't hesitate or fear—they're only dream spirits."
They're not real, then?
"In this dream state, only you and I are real—and I'm only really certain of myself."

Once the dream key is found, you must return to Abbot Durak.

"Did you find the key?"
Yes. Here it is.
"Good. Once I've removed these chains, we'll awaken.
Speak with me again in the waking world."

Outside the dream, the awakened Abbot can be spoken with.

"Without you, I'd still be trapped in that dream.
Now we must work together to stop this threat to Stormhaven."
Tell me about the threat.
"You saw my dream. Clearly Vaermina's cult, Supernal Dreamers, is behind this betrayal by the Midnight Union.
The outlaws of the Union took the Dream Shard, but I fear it's for Vaermina's evil purposes. We must recover it."

"I don't look forward to informing the King about this but we must let him know as soon as possible.
He will not be pleased."
Why will the king be upset?
"King Emeric must be informed that without the Dream Shard, we won't be able to supply him with the dreamless potions that protect him from the Supernal Dreamers.
His Majesty might reward the one who brings him word of this. Would you do it?"
I'll give the king the news.

Once the quest has been accepted, you can ask him more about the Dream Shard.

"Seek out the King in Wayrest and give him the news. He must know as soon as possible."

So you think the Supernal Dreamers were behind the Midnight Union's attack?
"I do. Which means those cultists are planning something—something big.
King Emeric must be warned. That is the highest priority."

Why were Count Hosni and Lady Adima in your dream?
"Mine was a nightmare of betrayal, and they are among my betrayers. Count Hosni was betrothed to our Sister Safia before he met Lady Adima.
And there is another reason."

What is that?
"It is an open secret that Count Hosni commands the Midnight Union. We thought him our friend."

The Return of the Dream Shard[edit]

Abbot Durak can be spoken with again once the Dream Shard is recovered.

After the Shard has been restored:

"You have triumphed. The threat of Hosni at-Tura's Midnight Union is quelled.
And we can return to watching and warding."
What of Vaermina? Are we free of her schemes?
"Not yet. But you've brought us a great victory. Vaermina's immediate threat has been foiled.
And now, we'd like you to have this. The other wardens and I infused our power into a mighty weapon to aid you in your fight."

"Returning the Dream Shard to its rightful place is no small victory, but Vaermina attacks on several fronts.
I kept this quiet, but Azura warned me. There is another Omen."
Another Omen in Stormhaven?
"Yes. Menevia is secure, but Vaermina's dark influence now seeps into the eastern region of Gavaudon.
Azura's shrine there has been desecrated. It's the Supernal Dreamers again. I'm sure of it."
The we should go there and stop them.
"I'm glad you're in this with me. We must stop the Dreamers and if there is another Omen, we must destroy it.
I leave now for Shinji's Scarp in Gavaudon. I want you there too, but first, I need you to warn High King Emeric."
I'll go inform King Emeric of the danger.
"I would send one of the Spirit Wardens to Wayrest, but after everything we've been through, they need rest.
I'm glad I can rely on you in these troubled times. The king trusts you, and I know you'll get the message to him quickly."

Abbot Durak can be met again in General Godrun's office at Shinji's Scarp.

"It's good you're here. The general says the battle does not go as well as he hoped. I told him you could help.
I've had little time to search for the Omen. Did you learn anything in Wayrest? Anything about nightmares in Gavaudon?"
No nightmares, but I heard Godrun's been acting strange.
"The general? If the Omen were to get hold of him, that would be very bad.
Before we act, we must be sure though. For now, we keep an eye on Godrun. Perhaps helping him defeat the Ogres will flush the Omen out."

"I'll be watching Godrun closely. You should do the same."

After Ending the Ogre Threat Durak can be found on the upstairs floor of the Murtag Clan Command Center.

Abbot Durak: "The Omen has pulled Godrun into a deep sleep."
"Praise Azura! I was losing faith. You were right about General Godrun. The Omen of Betrayal has the general in its grips. He was going to betray Emeric and attack Wayrest!
This was Vaermina's ultimate plan—to destroy the Daggerfall Covenant."
What was her plan?
"It sounds like her Omen has been twisting the general's mind, convincing him to betray King Emeric.
I suspected the Omen was manipulating events toward that end, but by defeating the ogres, you exposed its plan before it was ready."
So is the Omen gone now?
"No. Vaermina and her minion still have the general in their grips.
You've done this before, so I think you should do it again. We need to get Godrun back."
I'll enter Godrun's dream.
"You've done this before. Touching him should draw you into the dream."

After freeing General Godrun from the dream, Abbot Durak will want to speak with you again.

"Once again, you return safely from the dream, bringing one of Vaermina's victims back with you.
General Godrun seems to be feeling himself again."
That's good, but Vaermina is after the king.
"King Emeric? That——that is bad. We just received word that the king has fallen ill.
It cannot be a coincidence. Vaermina is raising the stakes. She makes a final bid for power by assaulting our king."

"King Emeric falling ill cannot be a coincidence. Vaermina is raising the stakes, making a final bid for power by assaulting the king himself.
I am out of my league. I will go to the king's side, but we must seek Azura's help."
How do we ask for Azura's help?
"You must go to Azura's shrine at the Weeping Giant. It has been defiled, and I fear the Supernal Dreamers are involved.
Regardless, the shrine must be cleansed. That is certain."
How do I cleanse it?
"To cleanse the shrine, you need to get glow dust from the wisps on the eastern shore. That, and the rare mineral, azurite, from the northern hills.
Cleanse the shrine and pray for Azura's guidance. She will send it."
I'll get Azura's guidance and then join you in Wayrest.

Speaking to him again:

"Azura has shown her favor to you before. I do not doubt she will do so again. I only pray she has the answers we need to save the king.
Go now. I will await your return in Wayrest."

After getting aid from Azura, Abbot Durak can be found watching over the dreaming King Emeric.

"I've done all I can, but the king seems to slip further away every hour.
I'm afraid there is no way to enter the dream either. There's something different this time——something far more dangerous."
Azura gave me a Duskstone with which I can enter the dream.
"A Duskstone? Fascinating. I've heard of them but never seen one. It's said that Azura once used a Duskstone to break the barrier between day and night.
Maybe it can also penetrate the barrier between waking and sleeping."

"I almost lost faith there. I don't know why I doubted Azura, why I doubted you.
Maybe it's from being so close to the king. He's consumed by terror in his dream."
That's the Night Terror at work.
"The Night Terror? Vaermina's own consort?
Then this does not even compare to the threat the Omens represented!
The Night Terror. His name was once Galthis, and he was Vaermina's lover. Now he is her champion."
Azura's servant said I must.
"I suppose you must. But be warned, the Night Terror takes many forms and has countless methods of inflicting pain and fear. No wonder the king suffers so.
Hurry then. Azura be with you, friend."
Don't worry. I'll save the king.

Speaking with him again:

"Use the Duskstone to enter the king's dream. Hurry! There is still a chance!"

Once the Night Terror is defeated and King Emeric is freed, Durak can be found in the throne room alongside his fellow Wardens.

"I thought we had lost you for a little while there. You seemed to be consumed by the dream much as the king was.
After he returned though, you slept soundly. I knew you were all right then, so I left you to rest. You needed it."

After the quest, he can be spoken with.

"You are truly favored by Azura. Wherever you go, and whatever you do, I hope you will not take her blessing for granted.
I should add that, personally, I am honored to have walked at your side in her light.
May she continue to watch over you."

This Online-related article is a stub. You can help by expanding it.
Retrieved from "https://en.uesp.net/w/index.php?title=Online:Abbot_Durak&oldid=2115816"
Categories:
Hidden categories: