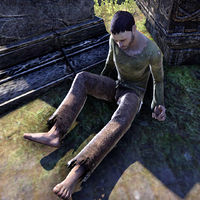 Beggar Matthew is a Breton beggar who can be found in Daggerfall. He is afraid he is going to be killed by a murderer who's killing off beggars in the alleys of Daggerfall.

When you walk in close proximity to Beggar Matthew, you can either hear him groaning or saying:

"Nobody cares about us poor beggars."

When you speak to Beggar Matthew during the related quest, he will want your assistance by asking:

"Murder! My friends are already dead, but the watch doesn't care. What's one less beggar? We're nothing to them. But if someone found the killer...."

Where should I start looking?

"Start in the trade district alleys. That's where Old Gianne was murdered just yesterday. Maybe Lieutenant Dubois will give you a reward if you do his job for him."

"Thank you. It's a terrible thing to be poor. You're invisible. No one cares."

I have some questions.

"I'll tell you whatever I know"

Tell me more about the killings.

"The watch found Old Gianne last night. The night before, it was Ragged Ron. When one of us dies, they blame the cold or the plague, but Gianne and Ron were cut up something horrible. Now they say it's a wolf."

"Can you believe it? A wolf in the city? But that's what the watch thinks. Who am I to say any different? Still, it feels more like murder than the work of a wild animal to me."
Why would someone kill beggars?

"We're everywhere. We're easy prey. Some folks just don't like us. Take your pick. The killer isn't stopping. It's brutal. Sooner or later, it's going to start killing a better class of citizen. Then the watch will take action."

Talking to Beggar Matthew after the quest has been completed, will result in him thanking you by saying:

"Friend, the poor of Daggerfall owe you our lives. We don't have anything, but if we did, we'd give it all to you."