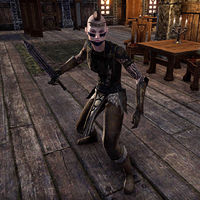 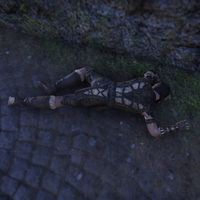 Bloodthorn Cultist is a dead Breton member of the Bloodthorn Cult who can be found in Daggerfall. He was murdered down the South Trade District Alley, by the Werewolf that has been killing off Daggerfall's beggars.

Due to his death, the Bloodthorn Cultist cannot be engaged with in conversation, but can instead be examined:

"<This man's spine was twisted several times before he died. The attacker must have been incredibly strong.>"

His body will disappear immediately after examining it.

When you activate the first totem, you'll see a vision of a Bloodthorn Cultist searching for something. Follow him across the bridge, and you'll see he's looking for Drusilla:

This Online-related article is a stub. You can help by expanding it.
Retrieved from "https://dev.uesp.net/w/index.php?title=Online:Bloodthorn_Cultist&oldid=2077726"
Categories:
Hidden categories: