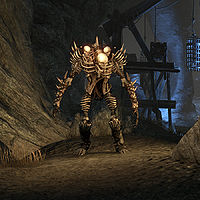 Bone Colossi are large aggressive undead creatures made from bones. While most Bone Colossi are elite difficulty enemies, smaller and weaker versions can be summoned by Bonelords to assist them in battle.

As they are considered elites, Bone Colossi are immune to all crowd control effects.