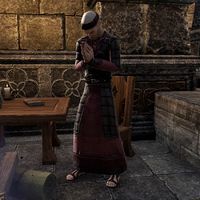 Brother Frizwyr is a Breton member of the Spirit Wardens found at Pariah Abbey. He is a healer and Abbot Durak is put under his care.

When he is first met:

"You're the one who helped save our fields.
Listen—I may have discovered the source of Durak's affliction."
How can we awaken Abbot Durak?
"It won't be easy. The spell enthralling the Abbot traps him in sleep and forces him to dream.
It's a clever spell, since the Spirit Wardens can't enter his dream. In fact, we can't dream at all."
Why can't you dream?
"We drink Dreamless Potions nightly. That's why we're immune to dream attacks from our enemies the Supernal Dreamers.
As of now, you're the only person in Pariah Abbey who can dream: the only one who can save Durak.
So how can I save your Abbot?
"We have another potion we rarely use: a Dreamstride Potion. It'll put you into a dreaming sleep. Then I can merge your mind with Abbot Durak's.
You must find him in his dream, figure out what holds him there, and awaken him."

If you try to speak to him before drinking the potion, he'll only say, "You must drink the Dreamstride Potion and free Durak from his dream."

Once Abbot Durak has been awoken:

"You're awake! Oh, thank you for saving our Abbot."

After the Pursuing the Shard quest is started:

"I imagine Abbot Durak has a plan to recover the Dream Shard. And I'll wager you're involved."

Brother Frizwyr is very impressed once the Dream Shard is restored.

"You saved Abbot Durak. You recovered the Dream Shard.
There are no words"