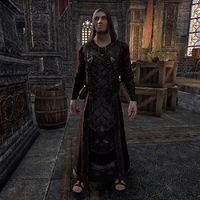 Brother Muran is a Breton member of the Spirit Wardens found in the chapel of Pariah Abbey. You are sent to talk to him about the Omen of Fear after dealing with it at Alcaire Castle.

When he is first met in the Abbey while on the Unanswered Questions quest:

"Say, I heard you recently arrived from Alcaire.
There are terrible rumors about Duchess Lakana. Are they true? Was she murdered?"
She's dead. Her murderer was influenced by a Daedra known as the "Omen of Fear."
"I am sorry to hear about the duchess. She was a good woman.
The "Omen of Fear," you say? I recollect hearing something about such Daedra before. You should ask Abbot Durak—he would know."

After completing the quest:

"I have a great deal on my mind right now. Perhaps we could talk another time."

Once the Dream Shard has been restored, Brother Muran has more to say.

"With the Midnight Union affair cleaned up, we won't have to treat any more of their victims.
Now that's something to look forward to."