The UESPWiki – Your source for The Elder Scrolls since 1995
< Online: Quests: Gold Coast / Side Quests
Jump to: navigation, search
Cleric Arvina in Anvil has posted a bounty for any group brave enough to enter Hrota Cave and destroy Exulus, a wispmother claiming the cave as her own. He also asked that the pauldrons of his fallen warriors be retrieved.

When you read the bounty board in Anvil it may read:

"WANTED: A group of warriors to cleanse an abomination from Hrota Cave.
For years, Exulus the Wispmother haunted Hrota Cave, draining the life from all who enter. This undead evil must be wiped away. Its many victims cry for justice!
Whoever bears proof of Exulus's destruction may claim their reward from Cleric Arvina. We also ask that you retrieve the pauldrons of Arkay's warriors who fell fighting Exulus, so that they may be honored for their sacrifice.
Arkay bless you!"

Accepting the challenge will start the quest. You can then either head straight for Hrota Cave or find and talk to Cleric Arvina for more information. Arvina can be found on the upper floor of the Mages Guild. When questioned about who Exulus is why he posted the bounty he exclaims that it is not a person it is a thing, an abomination, and that there is more than one wispmother in the cave. Despite his concerns about all of the wispmothers being threats he doesn't mind the others being left alive so long as Exulus is killed.

You can then ask him if he knows any way to kill Exulus, to which he responds that if he knew a way he would have done something about it. Then just before you go he reveals that Exulus turns its victims into thralls, so you'll be facing a horde of enemies and not just Exulus alone. 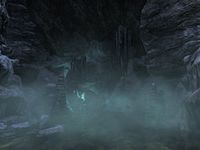 The murky depths of an infested cave

Hrota Cave is north of and within walking distance of Anvil, just off the main road. Make your way there and enter the cave. Inside you will run into an old friend, Mel Adrys. He is struggling to get past the undead to complete a quest he has undertaken—the Vampire's Prey. He asks you to aid him, which is fine as the two quests can be completed together, and Mel can help you past the undead in your way.

The first dead warrior is north of the entrance, so head that way. Before long you'll encounter a wisp and a fallen warrior. If the wisps in the cave are not killed quickly they will enter and reanimate more fallen warriors. Dispatch these first enemies and look into the alcove to the west. The remains of Etira Gravius are here. Search her and take Etira's Pauldrons. Make your way east until the path splits. Take the northern path to find the second warrior, Janius Cinna. Unfortunately the path to Janius is blocked by one of Exulus' "thrice-cursed spawn", Lecalus. Dispatch Lecalus and retrieve Janius's Pauldrons.

Head back to the fork and follow it east and south. At the next junction head east and then swim across the short flooded section. Here you will find the remains of Salanus Rian and a Skyshard, as well as a small horde of fallen warriors and a few wisps. Here, you can pick up Salanus's Pauldrons It may look like a dead end, but you can head both north and south through secret passages. This is where Mel's quest diverges from this one, his goes north while this one goes south. Once you complete Mel's task he will stop following you, so you may wish to delay his departure until you kill Exulus.

Head south from here and ignore the west junction. Keep going south until you must turn and go east. This large chamber is Exulus', and scattered around the chamber are dozens of corpses, each of which may be reanimated during your battle with the wispmother. Exulus is not particularly difficult if you can avoid being overwhelmed by the undead she summons to her aid.

There is nothing of value in the chamber, so head west to what appears to be another dead end. This is another secret passage. Just on the other side are the remains of Placidia Nerva. Take Placidia's Pauldrons and keep heading west. Where the main path turns north is a semi-hidden area where the last wispmother, Malinanta, is lurking. Dispatch her to complete the unofficial optional step of fully clearing the cave.

Now that Exulus is dead and you have all four pauldrons it is time to head back to Cleric Arvina. Follow the path north, taking the western path. Follow that path as it winds north and west again, then head south to the exit. Outside make your way back to the guild hall and speak to him. He will thank you for your service to Anvil and Arkay, and reward you with some gold and a container with a random item.