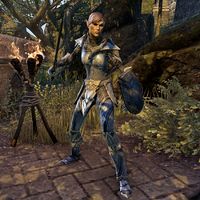 Cirenwe is an Altmer officer of the Aldmeri Dominion who appears with different ranks - Captain (in Auridon), Major (in Greenshade), and Tribune (on Stirk) - over the course of several quests. She is tasked with retaking the Seaside Sanctuary and Greenwater Cove from the Sea Vipers, and later accompanies Queen Ayrenn to Stirk.

Approaching her by Greenwater Cove, she'll call to you: "Over here! Soldier, over here!" Talking to her, she'll say:

"Soldier, we ... Wait, you're no scout. Identify yourself."
I've worked with Razum-dar.
"The Eyes of the Queen. Well enough, then. Maormer raiders hit the cove. I've called for reinforcements, but... if they don't show soon."
Can I lend a hand?
"Perhaps! There's an ancient device on the eastern cliffs, Aldmeri harbor defense. Should have stopped this bunch before they started. Not sure why it didn't. If you can get it working again, we'll have a much easier time of it."
I'll get it done.

After agreeing to help, you can ask further questions:

"Start by looking for my runner, Lorumel. She might have learned something. We'll be right behind you, soon as more blades show up. Good luck."
Can I ask you a question or two?
"Go. Have to keep my eyes open."

"Damned vipers came out of nowhere. The town was completely unprepared for the attack. We were doing a training exercise nearby and a guardsman ran to grab us. Tried to hold them at the docks, but... Well, you can see that didn't work out."

What is this harbor defense thing?

"Not really sure. But I know what it does—burns up ships that pull into the harbor! It's usually inactive, for obvious reasons. But the canonreeve should have been able to power it up long before the Maormer pulled into port."

Is Captain Ciranya your sister?

"Ahh. You're the one who destroyed the lighthouse at South Beacon. You saved my sister's life. Mara's heart, it's good to meet you."

Once you have saved the town, you can meet with her again:

"Mara's heart, you've done good work here. Little wonder Razum-dar trusts you."
We've won?
"Who knows how long it will take the town to rebuild? But with the Marines at our backs, we cut them to ribbons. We've won the day. Thank you. You've the thanks of a grateful Captain."

If you speak with her again, she will be determined that the settlement of the Cove will stay: "Greenwater Cove will be rebuilt, just wait and see. Those vipers won't drive us from this place."

During The Weight of Three Crowns, Cirenwe will be acting as a bodyguard for Queen Ayrenn. If you are not part of the Dominion she will warn you to show respect while speaking with the Queen: "Be respectful in the Queen's presence. I'll be keeping an eye on you."

However if you are part of the Dominion, she will remember you and say: "Good to see you! I've been promoted since I saw you last, and my sister Ciranya is in good health. I'll give her your best when I see her."

After the Daedra attack on the leaders, she will be injured but still alive. If you speak with her she will waive off any concerns: "Don't mind me. I'll be fine. It takes more than a few Daedra to finish me off."

This Online-related article is a stub. You can help by expanding it.
Retrieved from "https://dev.uesp.net/w/index.php?title=Online:Cirenwe&oldid=2037118"
Categories:
Hidden categories: