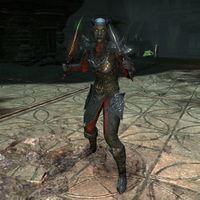 The Champion of Mehrunnez is a Xivilai who can be found in the Rimmen Necropolis. Alongside the Aspect of Darloc Brae, they form the group event of the public dungeon. When first encountered, they will be setting their forces against each other in a form of game. If you interfere, they will play with you instead.

After you have defeated both the Champion and Darloc Brae, the daedra will suggest that they work together:

Champion of Mehrunnez: "It cannot end this way, Darloc. Together, we can teach these mortals the meaning of death."

This Online-related article is a stub. You can help by expanding it.
Retrieved from "https://dev.uesp.net/w/index.php?title=Online:Champion_of_Mehrunnez&oldid=1971413"
Categories:
Hidden categories: