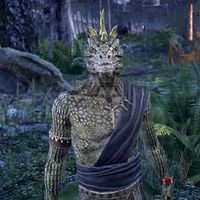 Chuxu is an Argonian who can be found standing outside the tavern in Lilmoth. He used to work on a nearby saltrice farm, until the owner died and now ownership of the property is in dispute between Nurhei and Paheiza. Chuxu now seeks the aid of the arbitrator Sulahkeesh but her reputation makes him too nervous to approach her.

He can be first encountered standing anxiously near the Lusty Argonian Footman.

"Huh? Ah, good-good day, traveler! Is there some-something that I can, ah, help you with?"
Are you all right?
"Is-is it that obvious? Yes, I am... well, no. Not really.
I've come to ask Sulahkeesh, a former agent of the Shadowscales, to help arbitrate a dispute. But speaking to an assassin, even a retired one, is a... terrifying prospect, to say the least."
I can talk to Sulahkeesh for you if you want.
"Ah, well, if you don't mind. To introduce the issue, if nothing else.
The dispute is between Nurhei and Paheiza, who both claim rights to a nearby saltrice farm. They've already both agreed to accept Sulahkeesh's decision. "
I'll take care of it.
"Thank you, beeko. You've at least given me time to work up some nerve.
And please, be mindful to show Sulahkeesh only respect. It would be best not to invoke her anger, given her... past affiliations."

Tell me a bit more about this dispute.
"Both defendants claim inheritance of a saltrice farm, previously owned by the now deceased Keema-Ru.
Nurhei, a local trader, claims the farm as collateral for debts owned. Paheiza, egg-sister to the deceased, claims it as a familial association."

What do the local laws say?
"The Saxhleel of Murkmire don't exactly have laws, as understood by outsiders.
Small disputes are handled by an arbiter of both parties' choosing. This can be anyone, though it tends to be the tribe's tree-minder."

Why were you asked to arbitrate this dispute?
"I worked for Keema-Ru for several years. As a neutral third-party with an interest in the farm's wellbeing, I volunteered to arbitrate.
Unfortunately, all attempts at negotiation have failed so far."

It seems to me you would be on Paheiza's side, given she was your former boss.
"I worked for Keema-Ru, and her alone. While Paheiza was... present, she did little to help the farm. I barely even spoke to her before this dispute.
I just want the farm to be in good hands."

Tell me about Sulahkeesh of the Shadowscales
"Simply put, the Shadowscales are an order of assassins that have been present in Black Marsh since time immemorial. Among the Saxhleel, they are both feared and respected.
Sulahkeesh is of an... advanced age, which is a rarity in her order."

A former assassin helps arbitrate disputes?
"The Shadowscales serve Black Marsh in many ways. Their role in our society is much more nuanced than mere killers. They help keep the natural order of things, as it were.
Sulahkeesh has simply decided to take a more direct approach to that role."

So it's common for the Shadowscales to judge disputes?
"I don't believe so. Their order may be secretive about their practices, but I doubt many are so open about their ...judgments.
However, Sulahkeesh has now granted Lilmoth her wisdom many times. She will see the right path, in this I have faith. "

After finishing gathering evidence for Sulahkeesh, you encounter Chuxu again within the tavern, being spoken to by Sulahkeesh. When he is greeted he will say, "Thank you for all your help. I now see my fears were overblown. Sulahkeesh has been nothing but pleasant."

As you speak to Sulahkeesh, you can hear him exclaim:

Chuxu : "My spines droop to see what this dispute has turned into. What a dishonor to poor Keema-Ru."

"I have an uneasy feeling about this ceremony.
Still, it would be unwise to ignore Sulahkeesh's judgement at this point. Especially given that I'm the one who sought out such a judgement in the first place."

He will be present at the negotiation located just outside the town gate. The following will happen once you arrive:

Chuxu: "Thank you both for agreeing to this negotiation."
Nurhei: "Of course! Far be it from me to deny the wisdom of a Shadowscale."
Paheiza: "Oh, please. Let's just get this over with."
Sulahkeesh: "Before we begin negotiations, I want the two of you to shake hands, amicably. To show your good intentions in coming here."
<The pair reach out and shake hands. An explosion erupts from where they touch, both are thrown backwards and are killed.>
Chuxu: "What … what happened? What did you do?"
Sulahkeesh: "What was asked of me. I resolved their dispute. I entrust the farm to you, Chuxu. You'd do best to not disappoint me."

When he is spoken to after this, he is understandably shocked.

"By the Hist, did you see that? They just touched and … exploded!
I-I suppose I can't be too surprised. I was the one who suggested we go to a Shadowscale in the first place. Though this is not the resolution I had in mind." 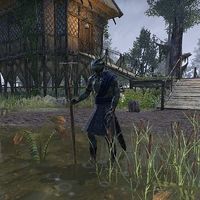 Once the quest is completed, Chuxu speaks of his future plans.

"I … I think I have to lie down for a moment.
And after that, it's off to get the farm back in order. Let's just hope I can honor Keema-Ru's dedication. Elsewise … well, I don't want to think about the elsewise."

Later on if you head back to the saltrice farm, you can find Chuxu in the field working to clean it up. When spoken to he will say:

"Welcome, beeko! How good it is to look upon your face.
I would love to chat, but there is still so much work to do before the farm can be in working order. I, ah, wouldn't want to disappoint anyone by shirking my duties …."