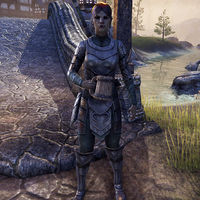 Constable Agazu is an Orc former constable of the Fell's Run Town Guard who was recently overthrown.

Prior to starting the quest, Frightened Folk, you'll find her either at the northern or southern bridges into town. After you can find her near the stocks outside The Run Inn.

She is standing by the bridge leading to Fell's Run, drunk and angry.

"What's this? Another stranger strutting into my town? Perfect! They'll probably give you the mayor's job! Experience? Bah! You don't need that! Just ask the new constable!"

"Me? No. Why would I be frustrated? Ten years as town constable and the mayor just up and decides to fire me the other day! Can you imagine? Says I'm getting too old and the new constable will do a better job. The dungheap bastard!"

Who's the new constable?

"That's the thing! No one even knows him. Gavendien - that's his name. He and his bailiff sauntered into town last week, and now he's constable? Something smells wrong. Say, think you could poke around and try to find out what's really going on?"

All right. I'll talk to people and see what I can learn.

"Sad times when I have to rely on a stranger, but I do appreciate you asking around. The mayor, the jeweler, the miller - they're all acting strangely. There's something they're not saying. I'll be back at the inn if you learn anything."

In what ways are people acting strangely?

"You have to understand. I've known these people for years. Shared drinks with them, gone fishing... I thought we were friends. Then all of a sudden, the mayor fires me. And now, no one even has two words to spare. To me, that's strange."

You sure this has nothing to do with your drinking?

"My drinking? By Mauloch, no! I hadn't had a drop in years until this happened. I quit a long time ago, after I woke up with a skinny little Wood Elf in my bed. As for today, this is my last drink. Well, maybe one more."

After you find out the true identity of the new constable, you bring the proof to her at the inn, where she is nursing her hangover. "Argh! My head is pounding. Three loaves of bread and I'm still foggy. I don't care what happens. Remind me to never drink that rum posset again. You were asking around town though. About that toothless runt of a constable. Did you learn anything?"

I found this note.

"Hmm. Hostages? I knew those bastards were up to something! Damn. Constable Gavendien just left here with Lady Mondorie. Bailiff Sagabar's still upstairs, though. We should try to get into his room and see what else we can find."

How do we get into the bailiff's room?

"Well, I bought this sleeping draught so I could sleep off this headache, but I guess I won't be napping now. Take it upstairs and find a way to distract Sagabar. Slip it into his drink. Then follow him into his room before he passes out."

All right, I can do that.

After knocking out Sagabar, you head back to Agazu. "Now that my skull's stopped pounding, I'm ready to crack someone else's. Did you find anything in that Redguard's room? Do we know where they're holding the hostages?"

Yes. They're holding the hostages at the old mill south of town.

"All right. We've got to go get them. That's the most important thing. Did you find anything to explain why Gavendien went to all this trouble? He didn't do it so he could just steal my job, did he?"

It's not exactly clear yet, but they are planning to make their escape at some point.

"Then maybe I should stay here and rouse the bailiff. My head's clear but my legs are still wobbly. You go to the old mill and free the hostages while I drag Sagabar to the stocks. He'll tell me what they're planning, one way or another."

You successfully free them, but upon returning to town, you find the townspeople grieving above Lauravieve's body. "Damn bastard Gavendien! Did it all for the jewels, and got away with it, too! He got me good. I'll survive, but he cut Lauravieve's throat. He didn't have to! He just did it to prove a point. I thought I could be cruel, but he is a monster!"

Is anyone else hurt?

"I don't think so. I don't know. Maybe if I hadn't confronted him, he wouldn't have killed her... At least the hostages are all right. You did your part, and you did it well." This completes the quest.

She continues, "We can't let that maggot-eating bastard Gavendien get away with this! Old Sagabar wasn't so tough after he got into the stocks. He told me where Gavendien went, where their camp is. "

Do you want me to go after him?

"What I want to do is go after Gavendien myself. But that's not going to happen any time soon and I don't want him to slip away. If you're willing, then yes. Do whatever it takes. Just put him down. Oh, and retrieve the jewels, too."

All right. I'll kill Gavendien and return with the jewels.

You defeat the bandits and return the jewels. "Sagabar and I were just making bets on whether you'd return. Looks like Sagabar's a two-time loser. Did you do it then? Did you kill Gavendien?"

I killed Gavendien and brought the stolen jewels back.

"Thank you. I suppose it will do little to console young Rubyn, but at least we can give Lady Mondorie a proper funeral. I got my job back. The mayor's even increased my wages. You have my gratitude. By Mauloch, you have the whole town's gratitude." You receive the Hero of Fell's Run amulet as a reward.