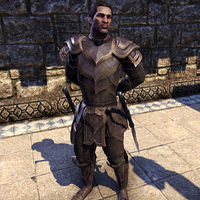 Count Hosni at-Tura is a Redguard and the leader of the Midnight Union. He can be found at his family's estate. His father and mother are Lord Rihad and Lady Sirali respectively. Since his betrothal to his new fiancee Lady Adima his character has changed drastically.

Count Hosni can be first seen in Abbot Durak's dreamscape.

Count Hosni at-Tura:"Ha! Durak. You say we betrayed you, but the Spirit Wardens and the Midnight Union were never allies."
Lady Adima:"Indeed. We serve two very different mistresses. Our dream is your nightmare. Welcome to the new world, Abbot!"
Abbot Durak:"You're no dream spirit—you're real. Can you help me?"

He can be encountered in the waking world at his estate while attending his betrothal party.

"Well, an unfamiliar face. I'm certain I didn't invite you. What's your business here?"
Count Hosni. We haven't met, but from what I hear, you could use someone like me at your side.
"Is that so?
Hunh. We'll see. Tell you what: I've got a task that needs doing, but it might get ugly. Take care of it for me, and you're in."

After completing Pursuing the Shard, Hosni has a task he wants completed.

"Now, let's see. I gather you want a piece of the Midnight Union's action. As for me, I have a family situation that needs to be sorted out.
That's where it might get ugly."
What do you need me to do?
"I want you to get the family signet ring. My father refuses to hand it over, in protest at my involvement with Adima.
That ring should be my engagement gift—that, and all it bestows. Get it for me, and I'll give you whatever you ask."
Where's your father?
"I've put him for safekeeping in the guest house across the courtyard.
I'd welcome him at our celebration, but he spurns us. Even a son can stand only so much."
I'll ask him for the ring.

Once The Signet Ring has been accepted, Hosni can be questioned further.

"See that you succeed. My beloved doesn't like failure, and insists that I punish it.
Severely."
This is an unusual betrothal party.
"My betrothed is an unusual woman. She challenges me, drives me to excel. She guides and strengthens me. And I find I've acquired her stimulating taste for bloodshed.
There's nothing I wouldn't do for her."

Hosni and his memories can be found within his dream during Saving Hosni. You will encounter snippets of memories as you look for the Daedra which has been corrupting him.

Lady Adima:"Sister Safia was never worthy of you."
Count Hosni at-Tura:"At one time there was a spark between Safia and I, but she doesn't hold a candle to you."

Lady Adima:"Durak is weak. The Shard should be ours."
Count Hosni at-Tura:"Stealing from Durak will be as easy as stealing a sweet roll from a baby."

Once the daedric spirit is dead the dream-Hosni can be spoken with.

"Lady Adima—she was the Omen of Blood all along. A spirit. Not real …."

After leaving the dream, the real Hosni wants to talk.

"My betrothed lies dead before me, but all I can feel is … relief."
You were controlled by one Vaermina's Omen spirits.
"I watched from a dream as a nightmarish reflection of myself committed made crimes of blood. I killed so many … I threatened my own parents ….
Righting the wrongs I did here will take years—but thanks to you, I can at least start."

When Saving Hosni is completed, Hosni has more to say.

"Now I must find ways to make amends.
I know one thing—the days of the Midnight Union are over."
What will you do now?
"I have to repair the damage I've done.
The first thing I'll do is order my guards to drive the Supernal Dreamers from our shore. Then I'll send for my parents."
Do you need help?
You have more urgent work to do. The Dream Shard must be returned to Abbot Durak at Pariah Abbey.
I sense that Vaermina's not yet done with Stormhaven. The Spirit Wardens will need the Shard to oppose her."
I'll take care of it.

While Hosni himself is not in Emeric's Dream, the nightmare version of him exists. He is also one of the forms Galthis takes.

The real version of him can be found within Wayrest Castle, once the Night Terror is defeated.

"Ah … good to see you again. Your fame is growing fast.
I hear your name all the time now. Better you take the spotlight, and I can stick to the shadows, eh?"
I'm glad to see you're doing well.
"I am too, my friend. I am too.
I heard the king was ill, and I understand we suffered from similar afflictions."
You came too see the king?
"I am … a little distracted, but yes, I came pay my respects.
Seeing Sister Safia here has caught me off-guard. Do you think … do you think she could ever forgive me?"
If you apologize, you can find out.
"Very smart. You are a wise counselor.
After I speak with the king, I will make my apology. Thank you, my friend. For everything."