The UESPWiki – Your source for The Elder Scrolls since 1995
< Online: Quests: Stormhaven / Side Quests
Jump to: navigation, search

I found a skull in some old ruins on a hill outside Wayrest. It spoke to me. It claims to be cursed, forced to serve as the eyes of Molag Bal. It begged me to destroy it and all others like it upon the charnel heap in the tower. 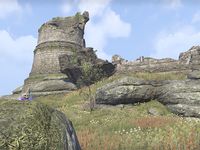 A skull spying on Stormhaven

West of Wayrest, around Soulshriven Tower, you'll see a strange sight: skulls, glowing with magic, perched in various spots near and in the ruins. If you get close enough, you might even hear one whisper to you. Talk to it and it will remark upon your status as Vestige:

"You ... you have been to Coldharbour. I see its mark upon you. You must be able to hear me."

"Yes, you! Like me, you have been defiled by the lord of Brutality.
I've been screaming for so long ... You must destroy us, Empty One! I do not want to be his eyes any longer."

"The Lord of Coldharbour! Molag Bal! The necromancers plan to place us where they can spy on his enemies. Even now, he looks upon you through me!
Gather the cursed skulls. Cast us upon the charnel heap in the tower. End our torment."

I will end your misery and blind the eyes of Molag Bal.

The quest will begin with the directive to gather six skulls. The one you get the quest from counts towards the objective, so you only need to get five more. The skulls are all over the place, so finding them should be easy enough. Just remember that grabbing them takes a second or two, leaving you vulnerable to attacks by the skeletons that guard the ruins, so be careful.

Once you have six skulls total, the quest will direct you to the central tower. Once inside, activate the pile of bones to throw the skulls on. In a puff of smoke, the Freed Soul will appear. Talk to this friendly wraith to wrap up the quest.

You're the spirit that was trapped inside the skull? What will you do now?

"I am free of Molag Bal's curse and will pass on to whatever fate awaits me.
Dark Anchors may yet fall, but Stormhaven will remain a blind spot for the Father of Vampires——at least for a while longer."

The Freed Soul will then give you the Carved Bone Medallion and some gold to complete the quest.