The UESPWiki – Your source for The Elder Scrolls since 1995
< Elder Scrolls Online: Races(Redirected from Online:Dark Elf)
Jump to: navigation, search 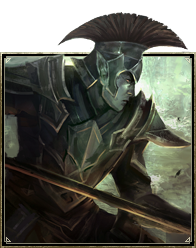 A list of all the Dunmer encountered in ESO can be found here.

Dunmer have an associated skill line that complements their lore-based abilities, with a focus on their balance between magicka and stamina and their adaption to magical fire. Abilities are listed below. Notes