The UESPWiki – Your source for The Elder Scrolls since 1995
< Online: Quests: Murkmire / Side Quests
Jump to: navigation, search

The Naga-Kur, or Dead-Water tribe, has sentenced Kishi, a member of the tribe, to death for interfering in the rites of passage and saving a few Nagas from certain death. One of the survivors asked if I could help Kishi. 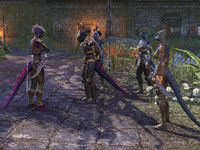 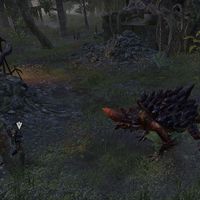 Kishi is in a bit of a pickle

Beel-Ranu tells you that a fellow Naga-Kur has been unjustly sentenced to death for interfering in the rites of passage and saving her and several other young Nagas. You need to find Bhoki and tell him you want to help. When you enter his house, he will be gone, but a letter on a nearby table will remain. Read the letter and find Bhoki.

Go straight from Bhoki's front door and travel past the Smith, across the front of the Hist. Turn left at the end of the pavilion past where the novices are training. You will find Bhoki beneath an arched root. He is annoyed by your presence Speak with him.

Bhoki says that the raj-kaal is being stubborn. He doesn't want to hear about why Kishi saved the novices. He's a stick in the mud of tradition. You learn that Bhoki is the former ka-deelith, and that Bhoki intends to stand his ground and die with his son. After telling Bhoki that you can save him, he tells you where to find Kishi.

Kishi was taken to the ruins at the north end if the village. Kishi is bound to a pole in the ruins, faced with the giant Haj-Mota, Bogshell. Defeat Bogshell and release Kishi from his bonds. He will lead you to a nearby pavilion so you can talk. You tell him that Bhoki wishes for him to leave, to go far away and never return, but Kishi refuses to run. He is determined to keep the Dead-Water tribe from becoming nothing more than a memory.

When asked why he's so determined to oppose Mewah-Jez, he reveals that Mewah-Jez's methods have lead to novices dying as opposed to becoming strong. His clutch was the last to make it through the rites of ascension. He says that Bhoki was the war teacher before one mistake lead to his disgrace. Mewah-Jez took his place, and she has lost every clutch that she has trained, and she's blamed the novices for being too weak.

Kishi runs off after telling you to find Bhoki and tell him that Kishi isn't giving in. Bhoki is relieved that Kishi lives, and tells you to seek out his hidden camp so that you can help him carry out his plan to show the war-chief that there are better ways to train the novices. Take the Bag of Fire Stones from the back room of Bhoki's house. As you head out to leave, Mewah-Jez takes Bhoki captive. She plans to use him to lure Kishi back to the village.

Head southwest of the village. To find Kishi, you will need to use the Fire Stones. Throw them at the Tamed Vine-Tongues (they look like flower buds on fire, or yellow laced Strangler buds spewing orange smoke) you see around the place and it will pull you up to where it is. When you find Kishi, speak to him. Kishi tells you that he will use Bhoki's techniques to guide you through the Path of the Lily. When an outsider succeeds where Mewah-Jez failed, the tribe will realize their folly. Kishi needs you to speak with Raj-Kaal Seelan, for he is the only one who can give an outsider permission to walk the Path. He warns you to choose your words carefully, as the war-chief has a temper.

Use the fire stones to cross the quicksand pit, and go back the way you came to face the raj-kaal. Kishi appears as you approach the raj-kaal, and proclaims his will to guide you through the Path of the Lily. Mewah-Jez and the warriors bare their fangs and draw their swords, but the war-chief tells them to stand down. Speak with him. Once you've convinced Raj-Kaal Seelan to allow you to walk the Path, go to the site of the ascension rite. The Path of the Lily lies west of the village, northwest of the Deep Swamp Forge crafting area. Talk to Kishi and have him brief you on what needs to happen.

The first part of the Path involves the trial of movement. You will navigate the largest, deepest pools of quicksand in all of Murkmire using the vine-tongues. You've exhausted your supply of fire stones, but Kishi can use his arrows to attract the vine-tongues. According to Dead-Water tradition, Kishi cannot aid you directly, but he can perform small tasks for you. Such as invoking the vine-tongues. You must reach the signal totem and ignite it to show that you've completed the first challenge. Once you're done speaking with Kishi, enter the Path of the Lily.

Be careful of the Catapult Cabbages along the Path. They can knock you into the quicksand. Sneak and incapacitate them, then point the arrow Kishi gave you at a vine-tongue to have him provoke it and drag you safely across the pit. When you reach a fork in the road, take the left path. It will be easier to reach the next vine-tongue that way. Roll dodge across the small stretch of quicksand, and have Kishi pull you up the ledge with the vine-tongue. The signal totem is just up the path. Have Kishi light the signal totem with his flaming arrows, and begin the next challenge.

The third challenge is to defeat the guardian of the sacred lily, Deroh-Zah. Deroh-Zah is surrounded by a green aura and a damage shield. Occasionally, he will run to the center of the area and roar, shaking the magical protections off and causing a massive shockwave that fills the whole arena. When this happens, use the fire stones to activate a vine-tongue and leap to safety. Deroh-Zah is vulnerable after this and can be damaged, though he will soon roar and regain the shield and the aura. Kill Deroh-Zah and claim the sacred lily at the waterfall beyond.

When you have the sacred lily, return to the village and present the lily to the war-chief. Kishi will be named the new ka-deelith, and Mewah-Jez will work alongside him. Talk to Kishi after speaking to the raj-kaal. You can find him in Bhoki's house. Congratulate him on his new position and collect your reward for saving the Naga-Kur.