The UESPWiki – Your source for The Elder Scrolls since 1995
< Online: Places: Southern Elsweyr / Ruins
Jump to: navigation, search 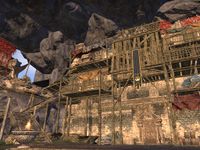 The Dragonguard Sanctum is a Dragonguard sanctuary on the island of Tideholm, which lies off the coast of Senchal. 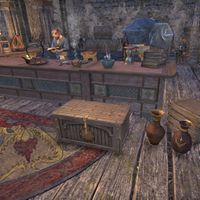 The Dragonguard Sanctum can be upgraded by doing quests related to the Dragonguard. Quests from the Main Story of the Dragonhold DLC, as well as dailies obtained from the Sanctum's questgivers, Chizbari the Chipper and Dirge Truptor, count toward the progress. Progress can be tracked in the achievements list, and every milestone unlocks more NPCs to liven up the Sanctuary. The notable unlockable perks at every milestone are: 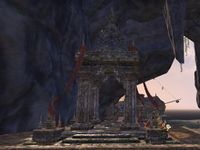 The Dragonguard Sanctum Wayshrine can be found to the south, near the docks.

This Online-related article is a stub. You can help by expanding it.
Retrieved from "https://dev.uesp.net/w/index.php?title=Online:Dragonguard_Sanctum&oldid=2099012"
Categories:
Hidden categories: