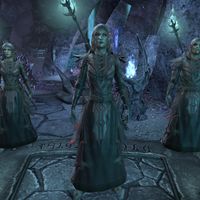 Dremora (also known as "The Kyn") are a warlike Daedric race primarily associated with the Daedric Prince of Destruction, Mehrunes Dagon; although they are often found in the service of other Daedra lords. They are commonly encountered throughout the planes of Oblivion. Dremora are known to be highly intelligent beings, and make capable warriors and mages. Notable features include horned faces that range from grotesque to resembling tattooed Dunmer, deep ashen grey, blue, purple or red complexions, and voices that are deep and guttural. Dremora society is a class-based clan system that upholds values of oaths, pride, honor and loyalty, both to the clan and to the Daedric lord they serve, whom they also venerate as a god. Dremora culture appears to focus on training and preparing for battle and war.