This article is about the person. For the book, see The Duchess of Anguish. 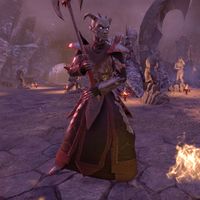 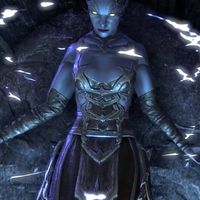 The Duchess of Anguish is a powerful Xivkyn torturer and a close ally of Molag Bal found in the Halls of Torment. She has been placed in charge of Sai Sahan's interrogation and torture, as to learn the location of the Amulet of Kings.

She later appears as a prisoner in Heart's Grief during God of Schemes, and can be freed if desired.

Strike
A basic melee attack that does minor physical damage

Heavy Attack
A charged melee swing that does moderate physical damage. This attack can be blocked to set the enemy off balance. If the enemy's weapon is empowered, this attack will root the player for a few seconds as well.

Lightning Grasp
The enemy raises its arm to call down lightning to strike the area around it, as indicated by red circles. This attack does moderate shock damage.

Hand of Flame
The enemy sends three fire lines towards its target dealing moderate flame damage to all opponents hit by it as indicated by red circles. This spell can be interrupted to set the enemy off balance or simply avoided.

Xivilai's Servant
She may summon a Daedric servant, such as a Flame Atronach, Clannfear or Ogrim, to assist her in battle. Killing her will banish the summoned daedra.

"How touching! Your friends are here to save you. Pity they arrived too late. It's for your next round of torture. You'll enjoy this one."
"We appear to have some unwanted visitors in the Halls of Torment. Let's make them feel welcome, shall we?"
"Your friend always had the opportunity to free himself. All he needs to do is reveal the location of the Amulet of Kings, and you can all be on your merry way."
"Enjoy your visit. You will never leave the Halls of Torment alive!"
"Too late, once again. Come, my pet. Time for your next session!" – After defeating the Lyris Doppelganger
"We don't get many visitors in the Halls of Torment, but there's always room for a few more... permanent residents."
"Such tenacity! Such ambition! Such bravery! Such a pity we're going to skin you alive and feast on your intestines!"
"Fools! Time is meaningless in the Halls of Torment! Whether it takes a day, or a thousand years, Sai Sahan will be broken!"
"Where is the Amulet of Kings? This can all be over if you just tell me. You can finally rest. You'd like that, wouldn't you, Sai?" – Entering the Chamber of Agony
"Who dares to defy the Duchess of Anguish? I will tear out your heart and make you feast upon it!" – After defeating the Varen Doppelgangers
"What death do you prefer, mortal? Slow and painful, or quick and painful?"
"I think I'll kill you, then resurrect you and kill you slowly―an eternity of agony. It will be glorious." 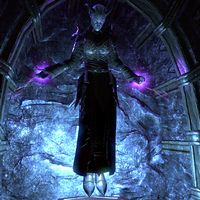 The Duchess of Anguish in Heart's Grief

Within Heart's Grief, the Duchess will be imprisoned with electric shackles, as she is punished for her failure.

"You! You did this to me!
Sai Sahan, my love … let me out, would you? I promise you an eternity of delights …."

Sai Sahan will reply to her:

Sai Sahan: "Vile seductress! You have earned your place here!"

If you choose to set her free, she will immediately turn hostile and must be killed.