The UESPWiki – Your source for The Elder Scrolls since 1995
< Online: Quests: Undaunted / Rivenspire
Jump to: navigation, search

Nerien'eth the lich has returned to the Crypt of Hearts to find the ghosts he imprisoned there arrayed against him. 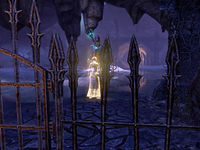 "You are not yourself, Nerien'eth—let me help you."
"Help yourself, wretch."

When you arrive in the Crypt, you will witness Alanwe trying to protect the spirits of her students from her former husband Nerien'eth. As the gate is locked, you can only watch as he banishes them.

Alanwe: "Leave the students be! I'm the one you want!"
Nerien'eth: "I don't know how you lot escaped from torture, but it will resume."
Alanwe: "You are not yourself, Nerien'eth—let me help you."
Nerien'eth: "Help yourself, wretch."
Alanwe: "Wait!"

She will then be knocked to the ground. Once the gate is unlocked, you can talk to her to see what is happening.

"Did you arrive from the surface? You need to take leave of this place.
There's a war on down here."
What's happening?
"My husband made a Daedric pact. One night, the Daedra, under contract with my husband, invaded the walls of this academy.
They slayed us, tortured our souls for years before we were freed. But my husband has returned."
I'll deal with him.
"Auriel must guide your steps for you to return today. I … accept your offer.
Nerien'eth is more powerful than I have ever known him to be. If we're to contest with him, we should go to his study up ahead—it's where he'll be."
Let's go.
"The students and I thought we could defeat Nerien'eth when he returned. We were wrong.
But even a lich as powerful as he's become can be beaten if we destroy his body. We just need to find him. Let's check his study up ahead. I'll meet you there."

You first goal is to find the study, head north and fight your way through the passage until you reach a dead end. Jump down through the hole in the floor and enter the ruined library where Ibelgast and his fellow Spiderkith will be guarding it.

Once Ibelgast is dead, continue through the eastern passage until you reach the first major boss of the dungeon.

Nerien'eth: "Leave those souls―kill the intruders!"
Ruzozuzalpamaz: "Watch your tone, mortal. Blade or no, only the Whisperer commands me."

Ruzozuzalpamaz, a powerful Spider Daedra will have been idly torturing some souls before you arrived. In this fight, she will periodically use Spider Bites which will cocoon a party member. It will be up to a fellow member to interact with them and use the synergy Free Ally. Her lightning attacks are particularly dangerous; Creeping Storm will place a large AOE beneath a random player, as it will follow the player around, they should do their best to keep the AOE away from everyone else. Lightning Onslaught consists of a spray of fast moving AOEs. She will also summon Spiders periodically.

Once Ruzozuzalpamaz is dead, continue east until you reach the locked study.

Alanwe: "I'll open the lock on the other side. The study is just a bit farther."

When you enter the room, Nerien'eth will immediately tell you to leave, while Alanwe runs to the door on the other side of the room.

Alanwe: "This way! Whatever he keeps in here now, it's well-guarded."
Nerien'eth: "Out! The lot of you! You've no right to enter!"
Alanwe: "This was our bedroom. We used to store our adventuring relics here."
Alanwe: "It's warded. Quite a defense for such a small room. There must be a way to open it—and these statues didn't used to be here."

Like she mentions, interact with the two statues flanking the door and it will open. Unfortunately, the room was also guarded.

Alanwe: "A guardian! Watch out!"
Alanwe: "The bedroom is open! Follow as you can!"

The Chamber Guardian will shamble out and you will need to deal with it before you can further investigate the room. It is a giant Skeleton that will constantly summon countless smaller skeletons which can overwhelm players if they are not dealt with. Once it is dead, enter the chamber where you will find Alanwe staring at her own corpse. She will have also found Nerien'eth's journal. 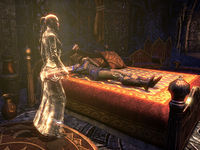 Alanwe: "This is where I died."
Alanwe: "My husband's journal mentions a ritual that brought the Daedra, performed out in the rain. Only a few courtyards on the grounds, so let's seek them out."

You have the option of asking her further questions about the ritual. Additionally, you can interact with her body whereupon she will burn it with blue flame.

Exit through the southern door and fight your way through the Daedra summoned by Nerien'eth. Eventually, you will reach a large chamber where you may meet some familiar faces.

Ilambris-Athor: "You again! We serve the Whisperer now, but we'll crush you just the same."
Ilambris-Zaven: "Have they come looking for the Blade, brother? How mortal of them."

If you have previously completed Crypt of Hearts I you may recognize the twin Xivilai, Ilambris-Athor and Ilambris-Zaven. As you fight them, they may seem suspiciously weak, this is because they have an ace up their sleeves. When you reduce their health to a certain point, the next phase of the fight will begin.

Ilambris-Athor: "The mortals think they've won."
Ilambris-Zaven: "Let's show them how wrong they are, brother."

The pair will merge and become a fiery Bone Colossus known as the Ilambris Amalgam.

Once the Amalgam has been defeated, you are free to keep searching for the Ritual Site. The quickest path to the correct courtyard, is go south, then turn right until you reach a large chamber. Alanwe will then ask an important question.

Alanwe: "Nerien'eth. That blade you wield. How did you come upon it?"
Nerien'eth: "All that should concern you is that it counsels me. It convinced me of your betrayal, of the need for the students to pay for their insolence."
Alanwe: "It has led you astray."
Nerien'eth: "On the contrary, this Blade grants me a clarity I never had in life. And I will have you respect it."

But more importantly, a portal will be visible at the other end of the hall. Unfortunately, it is guarded.

Mezeluth: "You're nothing to me."

Mezeluth is a Spiderkith Mage. During this fight, the most important thing to watch out for is her Fulminating Void attack. When cast, the players will be pulled towards her and an AOE circle will be placed underneath them as well as smaller circles around the room. If the player has two circles overlapping, then when it explodes, most players will be oneshot. In brief time when it is possible, the players will need to roll away from each other while avoiding the other AOES.

Additionally, her Fire Rune attack will leave persistent AOEs around the room.

Once Mezeluth has been dealt with, Alanwe will run towards the portal.

Alanwe: "A portal! This must be the ritual site—where the Daedra are coming through. And where Nerien'eth is waiting."
Alanwe: "We'll meet on the other side. Be wary." 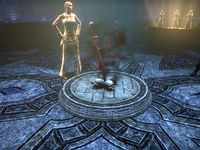 She will enter the portal and you need to follow her through. You will emerge in a large chamber in which a single sword stands in the center. Alanwe will try to reason with Nerien'eth for the final time.

Alanwe: "Nerien'eth. Cease this madness. My friends have defeated your horde. Lay down your blade."
Nerien'eth: "You so love the sound of your own voice. Couldn't you see the Blade wanted you here all along?"
Alanwe: "The blade! I can hear the whispers from it. By the Divines—so many lives."
<Alanwe clutches at her head and starts to scream in pain.>
Nerien'eth: "The Blade hungers for you—for the connection between us. And I give it gladly!"

To summon Nerien'eth to the battlefield, someone will need to touch the sword. Naturally, he immediately arrives to slay whoever would dare do such as thing.

Nerien'eth: "You think that Blade is yours to touch? It has a master. And he is me."

After you kill Nerien'eth, Alanwe will reappear and the trapped spirits will have been freed. Talk with Alanwe, who muse that maybe she never really knew her husband.

"Thank you, my friends. Nerien'eth was no longer the man I knew.
Perhaps he never was."
What happens now?
"I had hoped until the end that Nerien'eth could be redeemed. He never gave us the chance. I suppose I have to decide what to do with this blade. Try to move on. Whatever that means at this point.
Thank you again―you proved invaluable today."

Once you have completed the quest, a voice will call out to Alanwe.

Alanwe casts a spell on the blade, disappearing along with it. The Whispering Lady will be amused and she'll then speak directly you.

Whispering Lady: "Mortals never fail to amuse. That edge was fully sharpened, and would have seen great use at my side in the days to come, but Alanwe gave everything to cast it away. There is nothing left to take from her. You and I, however, will meet again."

You can leave the dungeon by teleporting out or using the portal. If you do the later you will find the other spirits either celebrating their freedom or mourning Alanwe.

This Online-related article is a stub. You can help by expanding it.
Retrieved from "https://dev.uesp.net/w/index.php?title=Online:Edge_of_Darkness&oldid=1991513"
Categories:
Hidden categories: