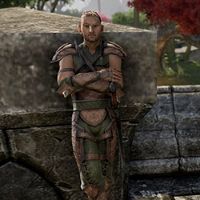 Egranor is a Bosmer found near the entrance to Skywatch. He wants to be sure that members of the Veiled Heritance are brought to justice.

"Been waiting for you. The boss sent me. Need to deal with this Heritance situation, now that we know Estre's turned."
The boss?
"Razum-dar, of course. We found a list. A list of four names. Veiled Heritance operatives at the highest level, now on the run from Dominion forces."

"These mer have been sentenced to death. Find them, and carry out the order. We have records of their last known location, that should help. Return with the proof of their demise, if you please."
I'll do what I can.

You can then ask him questions about the targets.

"Use the list to track them down.Good luck, and show mo mercy."

Who are my targets?
"Karulae, their rapid action planner. Calanye, their woman on the inside of the fighters guild. Helonel, racial purity advisor. Behind several documented attacks on Bosmer and Khajiit."

Who is my final target?
"Arianas. Strange one. Haven't heard her name linked to any particular crime. Rumor is that she's a personal friend of Estre's. Most likely a highly placed agent, but no idea about her area of expertise."

You work with Raz, then?
"I'm an Eye, same as you. The island's lousy with us right now. We need to get people talking, learn where the Heritance got their support."

What do you mean?
"The Heritance is massive. Arms and armor, food, logistics, supplies … Estre was going for the big win. Who supplied them? Who provided those weapons and armor? We have a lot of hard questions to ask in the coming weeks."

When you go to look for Aranias, he says, "Hopefully we can find Ari … Arianas before she causes any real trouble."

After you have found the final target, you can return to Egranor.

"So, how did it go?"
I got all by Aranias. She fled the island for Greenshade.
"The Heritance has expanded beyond Auridon? Damnit.
I'll make sure the boss hears about your good work. Thanks for your service."

This Online-related article is a stub. You can help by expanding it.
Retrieved from "https://dev.uesp.net/w/index.php?title=Online:Egranor&oldid=2021946"
Categories:
Hidden categories: