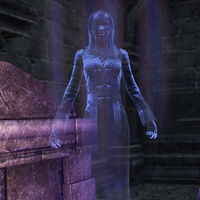 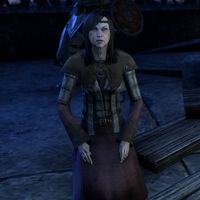 Frederique Lynielle is a Breton spirit who can be found in a crypt in Grimfield. In life, she was a priestess of Arkay, and served under King Renwic. They were killed together by Seamount invaders. She will give you a Staff of Arkay to help you stop the Bloodthorn Cult's plot.

Enter the crypt, and her ghost appears:

"Greetings, stranger. You are not a cultist. Help us defeat these necromancers!"
How?
"Take the Staff of Arkay, a potent weapon against undead. You must first charge the staff, then use it to destroy the foul abominations summoned by these necromancers."
How do I charge the staff?
"The blasphemers employ dark magic to raise the dead. Disrupt their rituals and release that energy. The Staff of Arkay will convert this into power to destroy their dark creations!"

You can ask her more:

"In life, I was a priestess of Arkay. I served King Renwic for many years. I was with him when the Seamount Orcs invaded. We died together at their hands."
The Seamount clan killed you?
"Many died under their blades. But that was long ago. The Bloodthorn Cultists desecrate our graves today. I beg you to stop them."

Are you the guardian of this graveyard?

"Even in death I watch over my people. Necromancy is a crime against Arkay. The aura of corruption builds as my countrymen's bodies are raised and desecrated by these minions of the Worm.
I need your help to stop them."

What can you tell me about these necromancers?

"The Bloodthorn Cult's necromancy corrupts nature. They're led by Reachmen of the worst sort, allies of Mannimarco.
They raise our dead to assault the Orcs. This desecration must end!"

If you speak to her again, she'll say:

"The Staff of Arkay. Take it, use it to strike down these blasphemers."

After taking the staff, she'll add;

"Disrupt the rituals, kill the cultists. Drain the energy from their defilements."

Once the staff is charged, you'll hear:

Frederique Lynielle : "The staff is fully charged. Quickly, meet me at my tomb."

Find Frederique's spirit at the tomb and she'll tell you:

"I sense great power in the staff. You've done well."
What do I do with it?
"The staff will reveal circles of corruption among the crypts. There lurk the Bloodthorn Cult's abominations, hidden in pockets of Oblivion.
Plant the staff in a circle to draw an abomination into our world. Then destroy it!"

Destroy the last abomination and you'll hear her voice again:

Frederique Lynielle : "It is done! Meet me at the west end of the graveyard."

At the coastal tomb, you'll find Frederique once more:

"The Bloodthorn's perversion of my people is ended. The honored dead are at rest once again."
Is the threat ended?
"The cult focused all their power into their abominations. Now these are dust and ash. The threat to us is ended, but the threat to you remains.
King Renwic wishes to repay our debt to you. Speak to him. Learn your true peril."

"Soon we will fade from this plane once more. We have you to thank for returning us to peace."

Inside the king's vision after speaking to Hunt-Wife Othikha, you'll find Frederique under the watch of a Seamount Executioner:

"Spare your blade, Orc. We have yielded to you."
Answer me true, and you live. Lie, and you die.
"Why threaten me? Our island is yours now. Spare us, spare our king, and let me lead the survivors into exile.
You have my word as a Priest of Arkay."

Tell me how to reach King Renwic, or more of you will die.

"I am not afraid of death. You, however, should be. What has bloodshed gained you but pain and death?
Pray for Arkay's forgiveness, child. All you will get from me is pity."

If you truly want to end this, tell me what magic your king plots.

"Then hear me. Arkay compels me to break my silence.
King Renwic is desperate. He seeks an ancient power hidden in the ruins. Scrolls as old as the island whisper of a terrible weapon, an Ayleid relic."
What does this weapon do?
"It summons an undead army, one I fear he cannot control. That army is a crime against Arkay, and it will slaughter more than Orcs.
I love my king, but you must stop him."

Tell me who among you can open that door, and I won't hurt you.

"We have nothing else to discuss. You will determine your own fate."

This Online-related article is a stub. You can help by expanding it.
Retrieved from "https://en.uesp.net/w/index.php?title=Online:Frederique_Lynielle&oldid=2077891"
Categories:
Hidden categories: