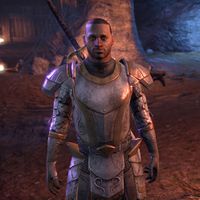 Guardian Sud-Hareem is a Redguard member of the Fighters Guild who has been captured in Spindleclutch I by the Whisperer.

In Spindleclutch II, he needs help finding his son At'avar, who has gone missing after their makeshift base was attacked by bandits.

He can be found tied up in a cocoon, next to the exit, in the room with the Whisperer.

"It was a nightmare! A nightmare!
Praxin and his squad succumbed to the whispers. (During Deadly Whispers)
"I feel so... violated. What that thing did to my soldiers... what it did to me! I may never sleep soundly again.
Thank you. If you hadn't come along... well, I don't want to even imagine.

"Now that you've given me back my life, I have much to think about.
Maybe I'll take some time to rest before I put together another expedition. The Fighters Guild is in your debt, my friend."

Otherwise this will be asked:

What was that thing?

"A monster! No doubt some vial beast from the darkest reaches of Oblivion!
I can't imagine how it got here. And I have no idea why it would do such things to our soldiers."

When you return to the Spindleclutch caves, you can find Sud-Hareem fighting off a Thralled Warrior. Once they are dead, Guardian Sud-Hareem can be spoken to.

"I remember you! You helped us on our last visit to this evil place. Thank the Divines you returned! I need your help. It's my son."
What's going on?
"My friends and I have been using these caves as a makeshift base. I thought we were safe here. I'd left to check in with superiors in the Fighters Guild. I returned to find the caves overrun with bandits, and my friends missing."
And your son?
"My son, At'avar was one of those I left here, My friends Falour and Mereel can take care of themselves, but At'avar is still young. I have to make sure he's all right, and I cannot make it through these bandits on my own. Please, will you help me?"
Let's go.

Sud-Hareem will run ahead, until he finds, Mereel. He will then question Mereel about what happened.

The Blood Spawn then leaps down and attacks the group. Once it is destroyed, Sud-Hareem wil come to a conclusion.

There is now an opportunity to ask him questions:

"If anything happened to At'avar...."

Why would you live in these ruins?
"My friends and I are monster hunters. We specialize in killing unnatural creatures. Werewolves, Daedra, and so on. We prefer operating in out-of-the-way locations. Spindleclutch is close to Daggerfall, while offering us the privacy we need."
We defeated the evil here. Did something happen after I left?
"The Whisperer was dead. The Guild pulled out because the ruins hold no tactical value. Most of us would like to forget everything that happened here. We lost a lot of good people."

I saved as many as I could.
"And we're grateful. Without you, none of us would have survived. Now, it seems I'll be in you're [sic] debt, twice-over."

Further in the caverns, Sud-Hareem will come across the spirit of Praxin Douare who seems confused about what is happening.

Guardian Sud-Hareem: "Rest well, Praxin. You cheated at cards, but you didn't deserve this." [A noise can be heard elsewhere in the room.]
"Did you hear that?"
"There's someone alive over here!" [He reaches a giant cocoon.]
"Help me get this cocoon open." [Faulor is broken out of the cocoon.]
"Faulor? Can you hear me?"
Faulor: "Boss? They have At'avar. Their leader took him farther in the ruins. Nasty looking bloodsucker."
Guardian Sud-Hareem: "I don't care how nasty their leader is. We're smashing in every vampire head we see until I get my son back. You in?"
Faulor: "How can I say no to a plan like that?"

After Urvan Veleth is defeated, the fighters guild group will rush into the vampire's lair:

Once Vorenor Winterbourne is dead, you can speak with Sud-Hareem:

"Why isn't...why isn't he breathing?
Oh gods, we're too late."
What do you mean too late?
"I mean too late! He's been infected too long. I've seen it before. Soon he'll be one of them. A vampire.
I...I have to stop this. I have to stop him from coming back.
Don't I?"

You have to give him a chance. He's your son.

"Is there? You just don't recover from vampirism.
Gods, what am I talking about? He's my son! I have to try.
I'm not ready to lose him."

It's better for him if you end it now. Nobody should have to come back like that.

If you advised Sud-Hareem to give his son a chance, he will pray to Stendarr for the first time in his life.

Guardian Sud-Hareem: "Merciful Stendarr, hear my prayer. I've never prayed to the Divines before. Even when my wife...even when you took my wife, I accepted it as fate. But At'avar, how can I accept that?"
"If anyone deserves your mercy, it is At'avar. Please, Stendarr, free him from this curse. Bring me back my son."

This Online-related article is a stub. You can help by expanding it.
Retrieved from "https://dev.uesp.net/w/index.php?title=Online:Guardian_Sud-Hareem&oldid=1969559"
Categories:
Hidden categories: