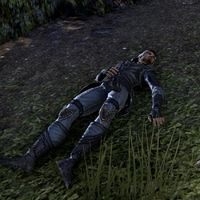 Helonel was an Altmer member of the Veiled Heritance who acted in the role of racial purity advisor, and was the one responsible for several recorded attacks on Bosmer and Khajiiti citizens.

As part of the quest given by Egranor to hunt down the remaining Heritance leaders, you're sent to find him; however he is found dead north of the town of Shattered Grove. Judging by the many blows on his body, he was beaten to death by more than one assailant.

Examining him will prompt the following message:

<This Veiled Heritance officer looks like he was killed recently.>
<Search the body.>
<The body has several obvious wounds. It's difficult to tell which caused the fatal blow, but it looks like there was more than a single assailant. Lying in the dirt is a badge bearing the name "Helonel.">
<Take the badge as proof.>