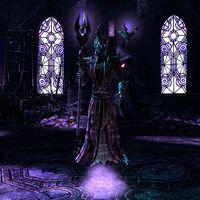 The Mad Architect is the final boss in the Vaults of Madness. He has a chance of dropping Architect's Shield, The Mad Maul, or a helmet from the Grothdarr set in veteran mode.

In life his name was Dutheil and he was known as one of the best architects of the age, as well as for his eccentric nature. A plan hatched by one of his rivals, Gasteau Chamrond, saw to it that his designs were stolen and plagiarized and that he was discredited by the nobility. This led to his mental collapse and his reaching out to the Daedra, who offered him revenge in return for becoming their personal architect. He accepted and was transformed into the Mad Architect. While he initially started with the three that had ruined him, over time he captured many more souls and upon the player group entering the Vaults, he aims to do the same to them. 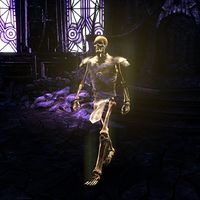 When he is approached in person, he will appear from the central skull door as a spectral skeleton, transforming into a lich when he reaches the center of the room. 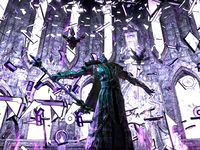 As a boss type creature, the Mad Architect is immune to all crowd control effects.

Grinning Bolt
A basic ranged attack that does high Magical damage. If taunted the boss will be forced to use this on the tank only.

Summon Undead
The boss summons Zombies, Reanimated Mages, Reanimated Monstrosities and Reanimated Atronachs to attack the party. These should be killed quickly to simplify the fight.

Claim the Dead
After summoning the minions, the boss does a large explosion around him for moderate magical damage. This cannot be avoided and should be healed through.

Deathly Grasp
The boss places magical runes on the ground that do moderate Magical damage over time as well as snaring the enemy. These do not have red circle indicators, so players should look for blackened areas on the ground and avoid them instead.

Undead Legion
The boss lets out a flash of light and summons spirits from the ground around him. This does very high Magical damage over time and should be avoided at all costs. This area will affect the circle he is standing on only, so players can use that as a guide.

Obliterate
The boss summons a bubble around himself and the windows around the room break. Any player standing outside his bubble will take very high Magical damage over time, so players should watch for this and position themselves accordingly.

When first entering the Vaults of Madness:

The Mad Architect: "You doomed yourself by coming here—you know that, don't you?"

Approaching the Mad Architect in his chamber:

The Mad Architect: "You've freed them. I've sacrificed much to bring those prisoners here, to keep them … occupied. I won't allow you to compromise that. Your head will make a fitting gift for Molag Bal."

Casting Summon Undead during the battle:

"You should never have come here."
"My minions will tear you asunder!"
"Those who serve me never stay dead."
"Rise! Rise and slay these fools!"

There are several Achievements associated with this enemy: