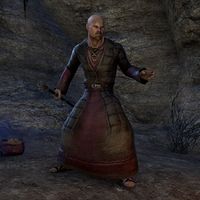 Master Altien is a Breton member of the Spirit Wardens found at the Pariah Abbey.

Master Altien can be found at the bottom of the Cave of Dreams defending Abbot Durak's body during Azura's Guardian.

"Friend or foe? Declare yourself!

No one will harm the Abbot, not while I draw breath."
I've come to help. I'm afraid Brother Hakam is dead.
"And I have more terrible news. Those damned outlaws cast a sleeping spell on Abbot Durak. I can't wake him.

He came down here for the Scroll of Summoning, said it would stop the biggest fire. I just hope it's worth what it cost."
Would this Scroll of Return help? I found it on Brother Hakam,
"Azura praise his foresight! This will get us back to the abbey.

Durak said this Scroll of Summoning should be read near the largest fire in the field. Please take it and use it there. I'll meet you at the abbey when you're done."

After receiving the Scroll of Summoning from Altien:

"Go now. Use that scroll near the large fire.

I'll get Durak and myself to the abbey with the Scroll of Return."

When the last fire is put out, Altien can be found in the Abbey courtyard:

Durak, you were right, my friend. You were right."
How's Abbot Durak?
"He's till under a sleep spell.

"But I've learned something. The Midnight Union wanted us to panic. The attack, the fires...they were just a diversion. While we were distracted, they entered the abbey and stole the Dream Shard."

"You must awaken Abbot Durak. He'll know how to get the Dream Shard back.

"Talk to our healer, Frizwyr. He's inside, tending to the Abbot."
I'll do what I can.

After starting Prison of Sleep

"We can't create more Dreamless Potions without the Dream Shard.

Without those potions we, and the king, are vulnerable to the Supernal Dreamers."

What is the Dream Shard?
"The Dream Shard is a priceless relic, a literal piece of Azura's realm of Moonshadow.

With it, we can distill water from the Cave of Dreams into Dreamless Potions. Without that shard, we can't make any more of them."

Why do you need these Dreamless Potions?
"We use them to protect ourselves from nightmare attacks by our enemies, the Supernal Dreamers. Since we don't dream, we're not vulnerable to dream magic.

We also send them to the king and his counselors...another reason we're tolerated here."

You mean King Emeric will be vulnerable now as well?
"Exactly. So you see how important it is to recover the Dream Shard.

The safety of the realm is at stake."

Azura's a Daedric Prince. How can there be an abbey of Daedra worshipers in devout High Rock?
"Strange, isn't it? Well, first of all, we perform a lot charitable works and otherwise keep a very low profile."

And second?
"Second—and more important—we are here on the sufferance of the authorities in Wayrest because we're dedicated opponents of the Supernal Dreamers.

Vaermina's perverted cult has been a curse on High Rock for generations."

After Abbot Durak has woken up:

I have no doubt Azura herself sent you. You will find the Dream Shard, my friend. You will save us."

This Online-related article is a stub. You can help by expanding it.
Retrieved from "https://en.uesp.net/w/index.php?title=Online:Master_Altien&oldid=1809993"
Categories:
Hidden categories: