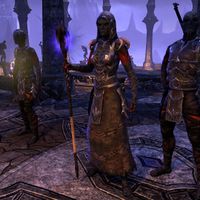 Mezeluth is a spiderkith boss in the Crypt of Hearts II. She serves as the fifth boss that must be defeated to progress. Her unique drop is Mezeluth's Ring. She will be found in the last chamber, and will teleport in front of the portal to Nerien'eth before the fight, summoning hordes of skeletons and spiderkith where she first was.

A basic ranged attack that does moderate magical damage.

The boss places pools of fire around the room that do moderate fire damage over time as indicated by red circles.

When she is approached, she will say, "You're nothing to me."